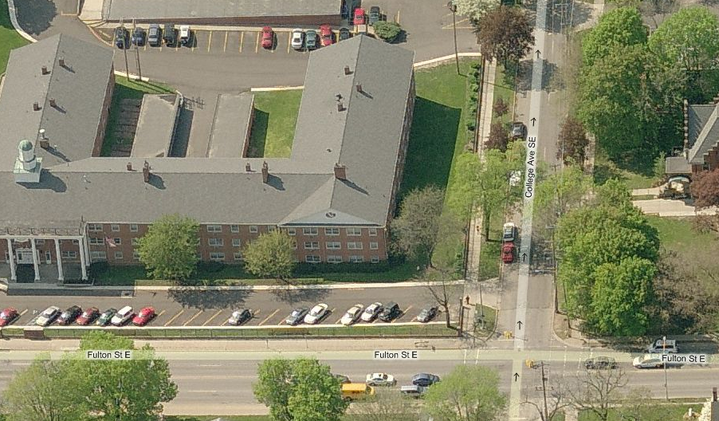 Located in the top-left of this photo, in the shadow.

Plots are only available to Waters House apartment residents only.  During the spring, summer, and fall months, they have a community garden. There are 10, 14' X 6' foot plots available on a first come first serve basis.  The fee per plot is $10 to cover general maintenance and water costs. Some general tools are provided during initial planting, but the tenants must provide their own hand tools, seeds, starts, and stakes. 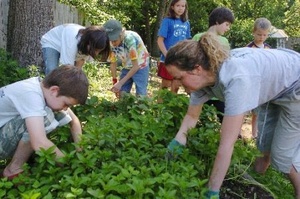 "Apartment dwellers don't have a lot of opportunities, nor the space, to put in a garden," said Michael Triant, whose parents, Linda and Jim Triant, own and manage the apartments. Triant, and his wife, Sally, live in an apartment in the Triant family home, 20 College Ave. SE, behind the complex.

The couple started the garden in 2006, then invited residents to participate. As people signed up, they also filled out a form stating what plants they wanted to grow. When organizing and plotting the garden space, the Triants used guidelines suggested by the American Community Garden Association. 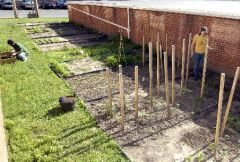 "We wanted to grow food, not only for us, but for the people in the apartments," said Sally Triant, a Master Gardener. "We share tools, but everyone is responsible for their own watering, plus everything is organic."

Tucked between a carport and the east wing of the apartment building, the garden is sheltered from the wind, but gets plenty of daylight for sunloving plants. "The garden has become a way of connecting with the people who live here," Michael says. "People even share the vegetables they've grown with residents who don't have a plot."

"A lot of people who garden here feel that connection," Sally said, adding that at the end of the season, that sense of community is celebrated with a harvest party.