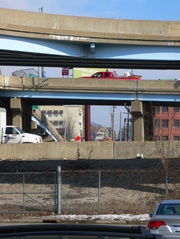 Wealthy Street is a major East-West route through Grand Rapids and East Grand Rapids. Wealthy extends from Heartside-Downtown West, forming the northern boundary of Roosevelt Park before crossing the Grand River and dead-ending at Garfield Avenue in SWAN. Eastward, Wealthy passes through Heritage Hill, forms the North-South boundary between East Hills and Madison Area and East Hills and Baxter, is a main thoroughfare of Eastown before dead-ending at Lakeside Drive in East Grand Rapids.

According to Old Grand Rapids: A Picture Story of Old Traditions by George E. Fitch, Wealthy Street was named by Jefferson Morrison for his wife, Wealthy Morrison.

Wealthy is one of Grand Rapids's great brick-paved streets, retaining much of its historical brick as well as new, refurbished brick.

Rapid Route No. 5 traverses much of Wealthy Street. It is also one of the proposed corridors for an eventual light rail system. Currently, traffic circles are being added at Wealthy's intersections with Lafayette and Madison.