The Wealthy Street Bridge is one of the bridges over the Grand River. It gets heavy traffic because it connects multiple paths through downtown, industrial, and expressway zones. It is the southernmost bridge in the city of Grand Rapids.

On the south side of the west bank of the river at the Wealthy Bridge is a major set of what appear to be Water Department outlets or valves. They are very large and let out onto a beautiful secluded river bank.

Views from the Wealthy Street Bridge 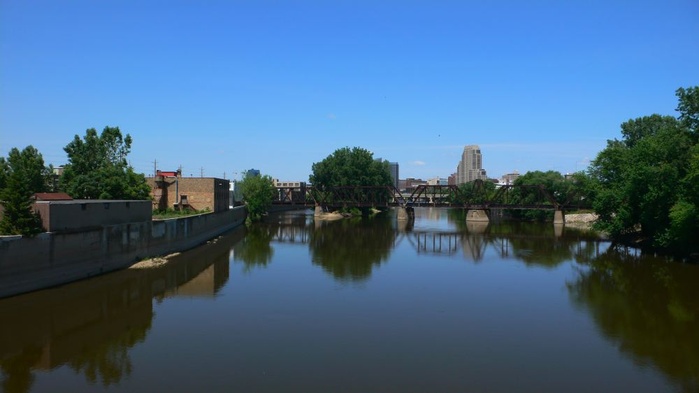 View to the North from the Wealthy Street Bridge. The full span of the Amtrak Bridge and the southern tip of Punk Island are in this view. 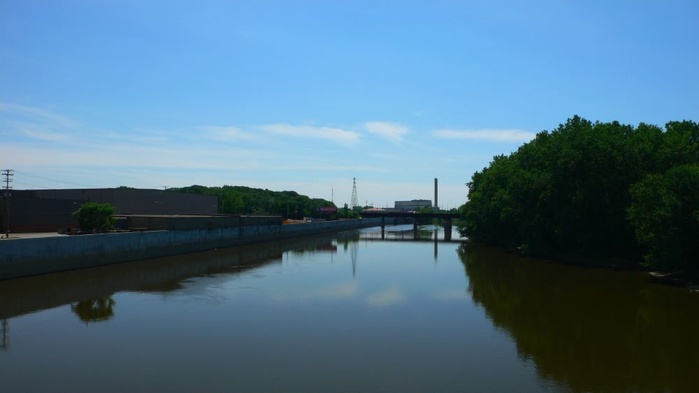 View to the South from the Wealthy Street Bridge. The view includes an out-of-service Railroad Bridge and the Chimney for the City Incinerator.

-"It looks simple and quite rundown now, but at the turn of the century it took two city governments, three construction companies, a finger wagging from the War Department, three years and more than $65,000 (a high figure for those days) to get the span across about 400 feet of water."--Grand Rapids Press, 5/30/63 Shaky Start for Bridge: Wealthy St. Span Had Trouble Getting Across Waters--GR Public Library, Michigan Room

-"Higgins and city did not get along"

-one of the worst winters in years--work stopped until spring

-April Fool's Day in 1905--Bridge was finished, but was not opened until fall because roadway and streetcar tracks had to be installed