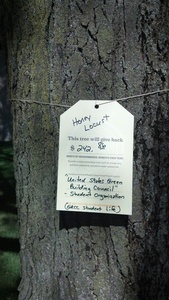 The Urban Forest is the connected ecosystem of trees and plant life that cover the City's open-spaces. If you were flying over Grand Rapids on a mid-summer’s day, you would see buildings, streets, homes, parking lots, and highways. But you would also see a rich canopy of trees. In some parts of Grand Rapids, the billowing leaves of the city’s 1.6 million trees cloak the area in green, while in others—for example, downtown—barely a patch of green is to be seen. From this aerial point of view, you might think of Grand Rapids as a city carved out of a forest, and in some ways, it is. All of those trees—in parks and cemeteries, along streets and in back yards, in golf courses and along rivers—make up our urban forest.

In 2008, Grand Valley State University completed an Urban Forest Ecological Services Assessment for the City of Grand Rapids. This study reported that current tree canopy coverage is 34.6%. Additionally, the report stated that Grand Rapids' urban forest removes over 330 tons of pollution per year, stores 438 thousand tons of carbon, provides 67 million cubic feet of stormwater storage, and contributes significantly to improving the water quality of the Grand River and associated watershed. This study calculated the total value of services provided by the Grand Rapids Urban Forest at over $372 million.

A History of Engaged Citizens

In 2006, Grand Rapids had little data on its urban forest, no urban forest plan, a curtailed city forestry budget, strained city-community relations on tree issues, no tree commission, and no nonprofit advocating for the City's trees. Complicating matters, Emerald Ash Borer (EAB) was quickly advancing, reaching grand rapids in 2007 and threatening as much as 15% of it's urban tree canopy. Concerned about the substantial loss of trees, and a limited City budget, worried citizens launched a discussion around the value and importance of Grand Rapids' trees. These citizen-led conversations have begun to cultivate an increased awareness of trees, and a growing dedication to managing Grand Rapids' urban forest.

In 2008 the Mayor of Grand Rapids appointed a citizen-led Urban Forestry Committee. Additionally, the City Planning Department initiated a process to update the 2002 master plan, which culminated in the Green Grand Rapids Master Plan. These processes led to adopting a goal to increase Grand Rapids urban forest canopy cover to 40%. Expanding efforts, the Friends of Grand Rapids Parks- in direct partnership with the City of Grand Rapids and funded by the Grand Rapids Community Foundation- launched a new initiative called the Urban Forest Project (UFP) in January, 2012.

Only several years after the initial EAB crisis, a partnership has emerged between between the City, its Urban Forestry Committee, and Friends of Grand Rapids Parks that has attracted more than $750,000 in grants, created a new community engagement program, increased community reach and awareness, and earned state and national urban forestry awards.