Elsewhere is a converted thrift store that now serves as an art studio and museum in downtown Greensboro, North Carolina. Elsewhere is open year-round to the public. 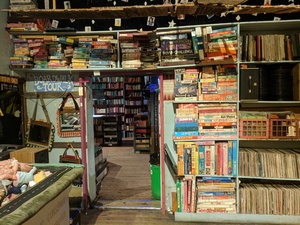 A view from inside Elsewhere.

(All Information Retrieved From Elsewhere's Website and this article from VICE)

Elsewhere began as a commercial thrift store in Greensboro and remained as such for more than 60 years. The store, originally owned by Joe and Sylvia Gray, started in 1937 as a depression era furniture business venture. Later, the business expanded to bulk sales in military canvas, hospital supplies and other necessities. The business eventually grew to include a boarding house and moved its storage to larger buildings on South Elm Street in downtown Greensboro.

Following the death of Joe in 1955, Sylvia cut back her business expenses by investing in cheaper thrift store wares and bulk scrap fabric. She also shut down her boarding house and reduced her storefront to just the bottom level of one building.

As time went on, Sylvia's collection in the store grew astronomically. By the time of her death in 1997, the bottom floor of the store was so filled with thrifted items that only a small path through stacks of objects remained.

After the death of Sylvia, the store was boarded up until Sylvia's grandson, George Scheer, and several friends began cleaning and organizing the building in 2003. They hoped to turn the building into a museum, so as George and his friends went through the space, they aimed to retain the bulk of Sylvia's collection in the store, so that it could become a "living museum" where people could create with and appreciate the items Sylvia amassed during her lifetime.

Elsewhere was eventually formed from this idea and became a nonprofit. In 2005 it began its first artist residency program.

Today, Elsewhere hosts a variety of on-site interactive art events and boasts an artist residency program that invites more than 50 artists a year from around the world to work and rework Elsewhere's collection. Elsewhere is also a year-round museum that is open to the public. 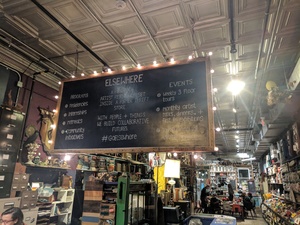 The entrance to Elsewhere.

Elsewhere is open Thursday through Saturday from 1-10 p.m. Pricing for general entrance to the museum runs on a sliding $1-5 scale.

Access to all three floors of Elsewhere is available only through guided tours, which take place on Saturday at 4 p.m. and cost $5.

In addition to regular exhibitions, Elsewhere also hosts community dinners, members mixers and artist talks for both the general public and members of their benefactors program.