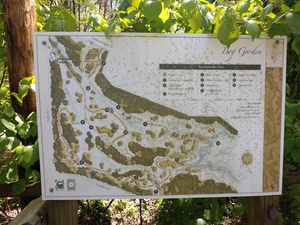 The Map of Bog Garden located at the Hobbs Rd. entrance.

The Bog Garden was discovered by Dr. Joe Christian in 1987 after he found a forgotten wetland owned by Starmount Farms belonging to a bird sanctuary. Christian then created Bog Garden’s trails and plants using help from Greensboro city officials and volunteers. The garden is now owned by the City of Greensboro.

Bog Garden has a raised walkway that stretches around a half mile. Part of the raised walkway overlooks Starmount Lake. Where the walkway leads into the lake there is a small seated area towards the lake where viewers can relax as they watch local aquatic wildlife. 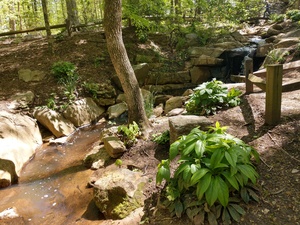 A photo of Dr. Joe Christian Falls located in The Bog Garden

A waterfall runs through part of The Bog Garden. It was created in 2005. In 2007, the waterfall was dedicated as “Dr. Joe Christian Serenity Falls”. There are two bridges over the man-made waterfall.

A bridge connects the opposite ends of the raised boardwalk near the Hobbs Road and the Starmount Farms Drive entrances. This bridge is called “Taylor Bridge”. It is made out of recycled plastic materials.

Founder, Dr. Joe Christian, is depicted in a bronze statue located near the Starmount Farms Drive across from the Feather & Fronds Trail near the entrance to the garden. The statue was donated in 2008 by Dr. John Chandler and other contributing patrons in honor of the effort Dr. Christian put forth substantial effort in helping to create The Bog Garden. Maria Kirby-Smith created the statue. 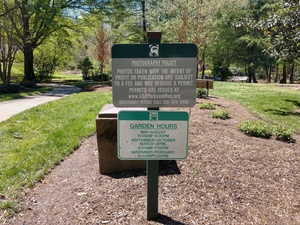