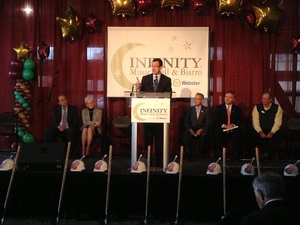 History
Front Street is a portion of Adriaen's Landing. The "Adriaen" in Adriaen's Landing is Adriaen Block, a Dutch explorer who sailed up the Connecticut River in 1614 aboard the Onrust, the first American-built ship. He got as far as Enfield, about 15 miles upriver of Hartford. The Dutch followed up on Block's journey by establishing a trading post at the confluence of the Connecticut and Park rivers. The year is reported as 1623 in some places, 1633 in others. Regardless, the Dutch set up business well before the Rev. Thomas Hooker and other English settlers arrived to establish the colony that became Hartford.

Phase 1: Establishments
* Connecticut's second Ted's Montana Grill location opened on the south side of Front Street in May 2014. Ted's Montana Grill is a restaurant and bar billed as "Authentic American Dining". By featuring the biggest bison menu in the world, Ted’s Montana Grill has made bison a popular menu choice today in dining, providing incentive for ranchers to actively grow their herds.

* Infinity Music Hall & Bistro opeed its Front Street location in August 2014 on the north side of the street. It's billed as "an intimate, acoustically pristine music hall and an amazing dining destination".  The Hartford location is modeled after its successful location in Norfolk, CT, Infinity Hall Hartford include a 500-seat music hall, hosting 250 popular live music and comedy shows per year, combined with a four-star, restaurant and bar. Both Infinity Hall locations are home to a vibrant restaurant and bar scene, with a music-themed, four-star Contemporary American-style restaurant on premises.


* The Capital Grille is an upscale steakhouse known for its hand-carved steaks, fresh seafood, and extensive wine list. The restaurant serves dinner seven days a week and lunch Monday through Friday.

One of two locations in Connecticut and 49 nationally, the Front Street location sits across the street from the Connecticut Convention Center. The 8,000-square-foot space includes a modern décor main dining area that seats 150 guests, three private dining areas, and al fresco dining on a small patio.

The Capital Grille’s 12-foot long, glass, floor-to-ceiling wine cellar holds a selection of 350 different wines. The restaurant has a private wine locker membership, enabling wine enthusiasts to have their favorite selection set aside and labelled prior to their arrival.

* Located in the Spotlight Theatre's lobby, Front Street Bistro serves both lunch and dinner seven days a week. The complex allows patrons to bring the remainder of their meals, including beverages, into the movie theater. Front Street Bistro features casual dining with entrees typically priced below $20.

* Spotlight Theatres is a hybrid movie theater and full-service restaurant and bar (Front Street Bistro) located on Columbus Blvd. between Front and Arch Streets. Customers have the option to attend a movie, dine in the restaurant, or both.

The four-screen complex features stadium seating and auditoriums ranging in size from 85 to 250 seats. Spotlight Theatres offers a variety of movies, including independent, art, and mainstream films.

Admission is $11 for the general public and $8 for seniors (55+) and children (3-11). There is also a $3 surcharge for 3D movies. The theater offers $8 matinee tickets and $6 tickets on "Bargain Tuesdays." Movie attendees who also dined at Front Street Bistro may bring the remainder of their meals, including alcoholic beverages, into the theater. Spotlight Theatres is the only movie theater in Connecticut that allows patrons to bring alcoholic beverages with them.

Patrons can park either in the South garage or in the metered street spaces. The South garage entrance is located on Front Street Crossing between Front and Arch streets. Garage parking costs $2 if customers also show a valid movie ticket stub. Metered spaces are free after 6 p.m. and on all holidays.

Phase 2: The Front Street Lofts
The Front Street Lofts will include 121 studio, one bedroom and two bedroom units in five stories on top of a ground floor with common areas and retail venues.  Amenities include stainless steel appliances, hardwood floors, granite countertops, laundry units and 9’+ ceilings.  In addition, the building will include a resident fitness facility and roof deck.  The Front Street Lofts are adjacent to the Front Street restaurant/entertainment district and the soon to be built University of Connecticut Greater Hartford campus.  Completion of the project is expected in August 2015.

Phase 3: UCONN Campus
In November 2012, the University of Connecticut announced plans to move its Greater Hartford campus, currently located in West Hartford, back to Hartford after leaving the city in 1970. UConn anticipates bringing approximately 2,200 students and 300 faculty and staff to the city's downtown.

Future Development
A Qdoba Mexican Grill fast-casual restaurant will open on Front Street in 2015 according to the Hartford Business Journal.