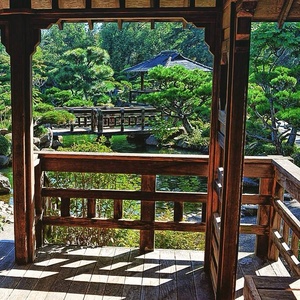 The Japanese Garden is a small park with a variety of carefully trimmed native California and Japanese plants and bonsai, arranged in a traditional Japanese style. The public are invited to wander along meandering paths and pagodas, watch koi swim in the pond, and visit a teahouse. The Hayward Park District also allows people to reserve the space for small weddings.

Hayward Japanese Gardens is the oldest Japanese garden in California. Located in the heart of bustling downtown Hayward, this exquisite garden is nestled in a pristine spot between two branches of San Lorenzo Creek. It provides a serene getaway from the urban life all around.

Designed by master gardener Kimio Kimura, the 3.5-acre garden is filled with beautifully shaped trees, manicured shrubs and monumental granite boulders. Following traditional Japanese design principles, all nails and fasteners in the gardens are recessed. Wood is notched and aged. There is no stain on the wood used in the fencing, entryway or the gazebos.

The garden includes a bridge, multiple pavilions, and a traditional teahouse. A waterfall flows into the large pond with its giant koi fish. A creek overlook offers a place to rest and meditate. Visitors can view a monument celebrating the friendship between Hayward and its sister city Funabashi, Japan.

At the park's southwest end is an interesting unrelated feature—a time capsule marking the location where Spanish Captain Juan Bautista de Anza camped on the night of March 31, 1776. De Anza camped here when he famously led 240 settlers and 1,000 head of cattle along a 1,800-mile expedition from Sonora Mexico to California along a new overland route.

The Japanese Gardens are one of Hayward's many jewels. They are a tribute to Hayward's long history and kinship with the Japanese people and culture. A must-see for visitors and locals alike, the gardens are open from 8:30 a.m. to 4 p.m. daily. Admission is free.