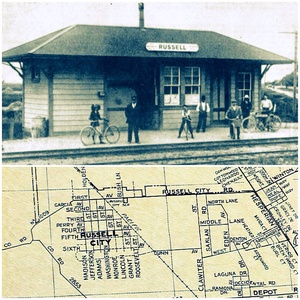 "The city may be gone, but the memories live on." Images of Russell City, California, in what is now west Hayward, circa 1910.

Russell City was an unincorporated community in west Hayward by the bayshore. The city was named after Frederick James Russell, who laid out the town in 1907.

In its early days, Russell City began as a community of Danish farmers and Latino and Filipino immigrant workers who lived along the railroad tracks of the Southern Pacific between Hayward and the San Francisco Bay.

During and after World War II it had its largest growth period, with significant numbers of African Americans moving there from the South to work in the shipyards. Russell City also had a large Latino community made up of Mexicans and Puerto Ricans who immigrated there during World War II.

The area was settled primarily by people of color in part due to the low cost of housing and land but also because widespread housing discrimination practices at the time prevented them from living in most other areas.

Russell City is known as the birthplace of West Coast Blues, and had a lively nightlife and music scene with multiple bars and juke joints, some beginning as just shacks with dirt floors and tin roofs.

Russell City existed as a separate unincorporated area of Alameda County until the 1960’s when county officials concerned about substandard living conditions in the neighborhood decided to annex it into the city of Hayward and redevelop it into an industrial park.

During the time the residents fought removal under eminent domain statutes, many of the buildings were destroyed by acts of arson. Ultimately, by 1966 Russell City’s homes and cultural institutions were torn down and the land cleared.

Ernesto Nava, son of the famous Mexican revolutionary leader Pancho Villa, lived in Russell City and was one of the last residents to leave.