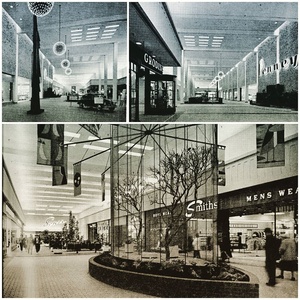 Southland Mall, as showcased in the May 1965 edition of Architectural Record magazine.

Southland Mall, originally named Palma Ceia (Portuguese for "Palm supper") was one of the first enclosed shopping malls in the nation. It opened to great acclaim and was lauded for its innovative concept of an enclosed mall with open store fronts. Shoppers marveled at the convenience and thrill of the no-doors, all-in-one experience offered at Southland.

These three photos provide a nice example of the 1960s retro styling in the original mall. At top left are the oversized sunburst chandeliers in the Penney’s court. The retro effect is enhanced by a factory-new Volkswagen Beetle, likely from the Hayward dealership. At top right is another view of the Penney's storefront before the lower level food court was added. At bottom are the large aviaries which once lined the center promenade, complete with chirping birds.

The original Sears storefront is visible in the background of the lower photo. In the foreground is the Smith's menswear store, which relocated from the Foothill Strip when the mall opened. Several other retailers left the Strip in favor of a mall location, which contributed to the Strip's decline in the latter part of the 20th century. (Fortunately the Strip is now undergoing a significant revitalization.) Other past features of the Southland Mall complex included: an ice skating rink on the main level, an arcade on the lower level including bumper cars (Le Mans Speedway) and later a large 1980s-era video arcade, the Southland Cinema, Farrell's Ice Cream Parlor, the World's Fare Food Court, and many other bygone favorites.

Today, Southland Mall continues to be a success under the new management of Rouse Properties. Unlike many other East Bay malls, Southland consistently operates at or near a 100% occupancy rate. The restaurant pads on the west side of the complex are particularly popular.