photo taken by Hannah Djavadi behind the Hollywood Sign

The Hollywood sign is a famous landmark in Los Angeles, California and looks over the city of Hollywood. The sign recognized worldwide as it's the symbolic representation of the entertainment industry. The legacy of the sign is far richer than it's nine letters displayed as it’s recognized worldwide through pop culture.  The sign was created in 1923, and it was then that the sign became a beacon for the entertainment industry, as it represented the glamorous and dazzling life, which catered to the stars. To other people the sign represented broken dreams and the realistic life of being and actor or actress in Hollywood and the tragic endings that can come with being a star.

The sign is located on Mt. Lee Mountain in the Beachwood Canyon area in the Santa Monica mountains. Accessing the sign is easy for locals and tourists and it’s just a walk up Beachwood Drive as it leads you into the park. Beachwood Drive is filled with beautiful and original homes and the neighborhood has it’s own market, café, and shops that still reflect the original properties and the timeless history of the 20’s.

Hiking the sign has been a major attraction for those who visit the park. Residents in the community have expressed concerns about sightseers and people who wanted to visit the sign. It was causing a lot of traffic in their neighborhood and was disrupting their everyday lives. This raised concerns for their safety because of how narrow and curvy the roads are. The residents were worried about what they might do if there was a fire in their community due to the brush and dry climate, making the area a high fire risk. Out of respect for the residents who live on Beachwood Drive, there are marked signs where individuals are asked not to park. Hikers will park at the bottom of Beachwood drive and walk up the hill. From there, the park is marked with signs as there are many options to view the sign. Signs are marked with miles and directions so individuals are easily able to navigate the park. 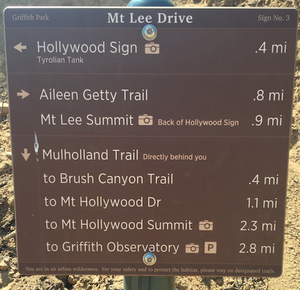 photo taken by Hannah Djavadi of marked signs throughout the park

The sign’s original purpose was used for a temporary real estate advertisement. It was intended to leave the letters up for only a year and a half. Additionally, “The "Hollywoodland" sign is constructed at a cost of $21,000 atop Mt. Lee. Thirteen 50-foot letters and four thousand 20 watt light bulbs pronouncing, in classic advertising phonics, "Holly"... "wood"... "land"... Hollywoodland." {C}[1]

The sign had lit up as its main purpose was to attract and generate attention towards the advertisement. In the 1940s the letter H on the sign was destroyed due to the signs caretaker, Albert Kothe. According to one person Kothe was driving intoxicated at the top of Mount Lee and lost control driving causing him to drive off the cliff directly into the letter H. Luckily for Kothe he was not injured but the letter was completely destroyed. The signs trust disputes instead tell the story that the letter was knocked down due to heavy winds that night.

By the 1970s the O on the sign was falling apart and started to look like a lowercase u, and the third O on the sign had completely fallen down. At this time the sign read "HuLLYWO OD". In 1978 the landmark was restored by Hugh Heffner, founder of Playboy magazine along with nine other donors who each gave $27,778 totalling $250,000 to help repair the sign. Each of the doners owned a letter on the sign:

When the sign was rebuilt, “land” was taken out of Hollywood to reflect the city rather than the housing developments and real estate. “Beginning in August 1978, almost 200 tons of material were used”[2]  The sign was replaced with a more permanent structure, created of steel with steel columns and concrete foundation to keep it in place. The letters on the sign were now 45 ft tall and 31 to 39 ft wide. The new version of the sign was revealed on November 11, 1978 and was televised on CBS celebrating the 75th year anniversary of the sign. In 2005 the sign was redone again by repainting the letters white.

“Local groups have campaigned to make tourist access to the sign more difficult. The Hollywood Sign Trust convinced Google and other mapping services to stop providing directions to the location of the sign, instead directing visitors to two viewing platforms, Griffith Observatory, and the Hollywood and Highland Center. Another, less remote area from which the sign can be viewed is Lake Hollywood Park on Canyon Lake Drive”[3] 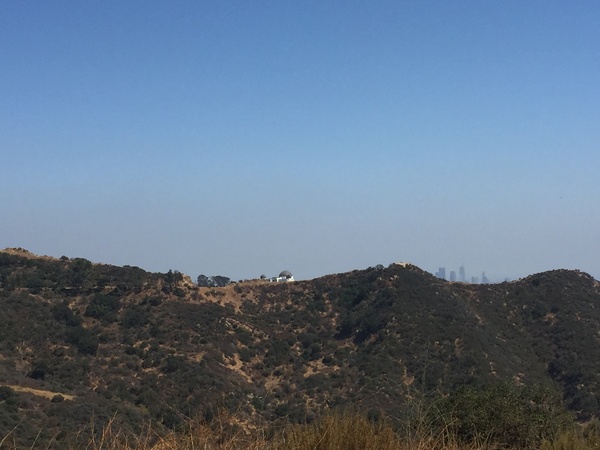 The sign has played major significance in film, entertainment, and music. During the 30’s, a New York stage actress committed suicide on the H of the sign which unveiled a multi-faceted interpretation of this iconic symbol-one that was more dark and tragic. “When Japan attacked Pearl Harbor in 1941, Hollywood mobilized to become a full-time war industry. But the War also had a more subtle effect on moviemaking and creative choices.”[4] In 1948, “box office receipts plummeted 45% from wartime highs. The culprit: Television. With characteristic resilience, Hollywood soon managed a successful transition to the small screen.” [5]  Recent films where the Hollywood sign is included are: “San Andreas (2015), Sharknado (2013), Gangster Squad (2013), Seven Psychopaths (2012), Argo (2012), and Rock of Ages (2012) to name a few. [6]

The sign also attracted lots of people to vandalize and destroy it because of how popular and recognizable it was becoming. In the year 2017 a group of people changed the Hollywood sign to "Hollyweed". The sign was also changed to "Hollyboob" for a short period of time. Because of these series of unfortunate events and vandalism the sign is now protected with a wired gate and a security system to help prevent anything from happening to it.

The sign recently had its 90th birthday in 2013. It continues to represent the past and future growth of the entertainment industry, and all the new dazzling opportunities. 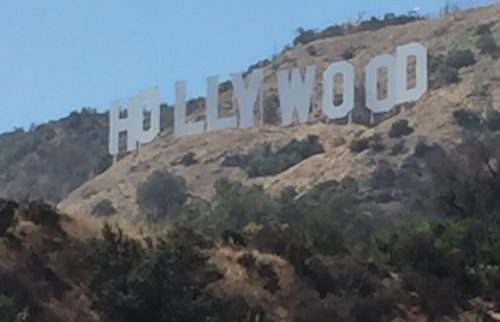 a photo taken by Hannah Djavadi

[1] “The Story of Hollywood Land” by Gregory Williams. Retrieved from http://www.beachwoodcanyon.org/HISTORY.htm on July 1, 2016.

[4]The History of the Sign Retrieved from http://hollywoodsign.org/the-history-of-the-sign/ on July 1, 2016.

[5]The History of the Sign Retrieved from http://hollywoodsign.org/the-history-of-the-sign/ on July 1, 2016.

[6] The Sign in Popular Culture: Movies Retrieved from http://hollywoodsign.org/category/the-sign-in-the-movies/ on July 1, 2016.