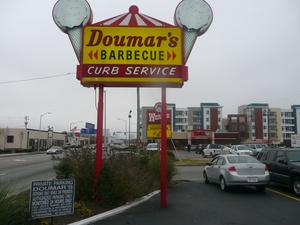 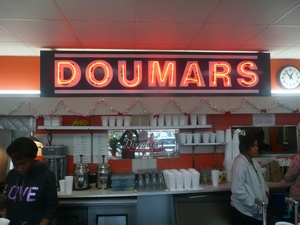 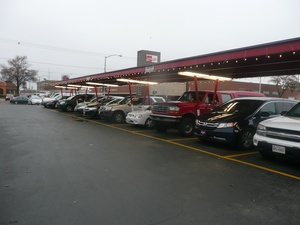 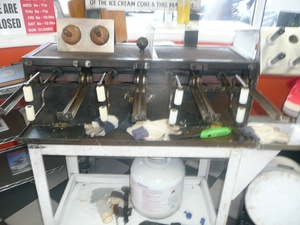 Doumar's is a landmark diner & curb service restaurant here in the Hampton Roads. Located just outside of Downtown Norfolk on Monticello Avenue, Doumar's is known for their North Carolina barbecue but are famous for their ice cream which is served on waffle cones. Owned by the late Albert Doumar, Doumar's has been serving the Hampton Roads area for over 100 years. Despite being surrounded by other fast food chains such as Cookout, Wendy's, Taco Bell and Chick fil a, Doumar's is still able attract customers year in and year out.

Senior founder Abe Doumar was struck with the brilliant idea of putting ice cream on top of a waffle cone. With this inspiration, Abe built his own waffle machine. His four-iron waffle machine allowed Abe to roll a waffle while three others cooked. This also allowed Abe to produce many more cones than the single iron machines that were present during that time. In 1905, Abe was then opened his first ice cream stand in Coney Island, which later became a chain of Doumar’s ice cream stands along the east coast. Abe and his brother opened a stand in Norfolk in 1907 at the Ocean View Amusement Park. They launched the stand during the 1907 Jamestown Exhibition and quickly became the most successful out of all of the family stands, as they sold close to 23,000 cones in one day.

Eventually managing this operation all alone started to get difficult for Abe. Abe then passed the primary responsibility of the Ocean View stand to his brother George. Upon receiving full responsibility of the Ocean View location, George decided to expand the business by wholesaling waffle cones in the 1920s. After a hurricane in 1933, George decided to reopen in Norfolk due to its central location and from the amazing success of his stand that was in Ocean View. George later added classic sandwiches to vamp up the menu so the business could be open year round. George and his two sons, Albert and Victor, were able to keep Doumar’s on its feet despite of all of the other fast food chains that started emerging in the 1950s.

Doumar's is so famous for their waffle cone that Guy Fieri, from the Food Network Channel, had Doumar's on his hit show "Diners, Drive-Ins and Dives." Do not just think that Doumar's is only good for an ice cream cone, feel free to explore their delicious menu.

If you are a Norfolk native or just passing through, be sure to swing by Doumar's for some excellent service and even better food!