Ruth Brown, known as the “Queen of Rhythm & and Blues”, was born in Portsmouth, Virginia. She attended I. C. Norcom High School and  was a member of the A.M.E. Church choir. Later, Ruth signed with Atlantic Records where she scored numerous hits on the R & B charts in the 50’s. She returned to music in the 70’s to star in television, movies, and Broadway, earning awards as Best Actress in a Musical and Best Female Jazz Performer.

This is part of three murals done of local musicals  by Mandy Smith on the Colony Theater. The other two are; Tommy Newsom and Bill Deal & The Rhondels.

This piece was created to evoke Ruth's sense of style through her rich music. Some of the instruments prominent in her music play a part in this composition, with her voice showcased as the dominant presence. The style of the negative space is simplistic with a vintage feel to flow with the other nostalgic panels. 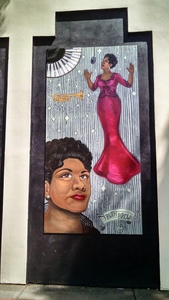 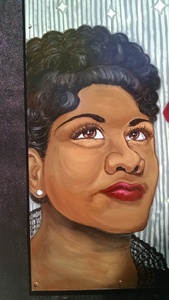 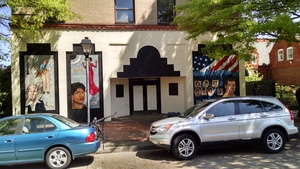