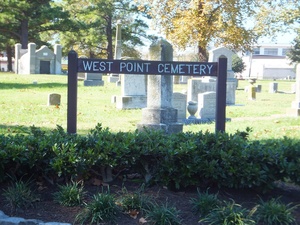 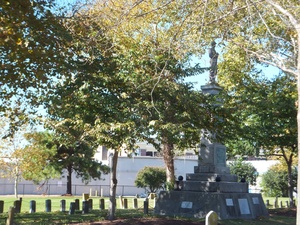 Within Elmwood cemetery, to the west of the property separated by a wall, is the 140 year old West Point Cemetery.  West Point is an African American cemetery that includes a memorial to the African American soldiers and sailors who served in the Civil War and the Spanish American War. Also, in 2007 it was added to the National Register of Historic Places.  West Point reflects the changes that took place in Norfolk’s society in the late 19th century.  For example, the election of James E. Fuller, Norfolk’s first African American councilman in 1881.  West Point started out as a Potter’s Field, a place where they buried very poor people or strangers who couldn’t afford burial.  According to the National Register of Historic Places, the cemetery was authorized by the Common and Select Councils for an African American cemetery in 1873; it was located west of Elmwood, a white cemetery and separated, due to segregation laws, by a 10 ft. wall that stretched 8.12 ft.  According to the city ordinances, it was supposed to be governed with the “Same regulations as provided in Elmwood”, although there were rules that applied to West Point that didn’t apply to Elmwood such as strangers could still be buried there at the council’s request.[i]  Many African Americans didn’t like the idea of burying their loved ones in a Potter's Field because the name implied less than desirable people were buried there, which was probably true.  So in 1885, Councilman James E. Fuller petitioned the council to change the name to West Point cemetery.[ii] 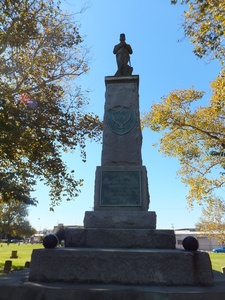 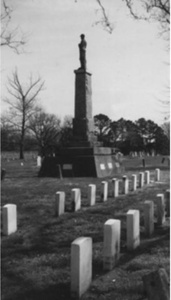 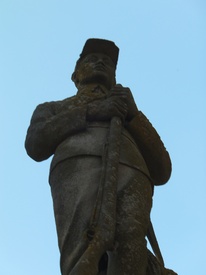 He also requested on March 3, 1886, that a part of West Point cemetery, Section No. 20, be dedicated to the African American Veterans of the Civil War and the Spanish American war.  James Fuller being a veteran serving as quartermaster in the first United States Colored Cavalry was mainly responsible for starting the fundraising efforts to raise money for the monument, since little money was available to build it.[iii]   So for about 20 years Fuller, the Women’s Auxiliary Relief Corp and the community slowly raised money by selling pies, chicken dinners, raffle tickets, and held concerts. May 30, 1906 the committee had raised the funds needed for the building of the base of the monument.  It is described as having a steel frame covered with concrete, it measures 13.5’ wide by 10.5’ deep and stands 42” high, on top of this base are three granite slabs that form a step, the bottom slab is 8’ square by 16” high and then it reduces in size to the smallest which is the base for a 42” block of granite which becomes the base for a 13’ granite column with a platform that serves as a base for the life size bronze statue of the first African American to receive a Congressional Medal of Honor, Sergeant William H. Carney.[iv]

According to the Colored American Newspaper, Saturday, July 18, 1863, 37 years ago, was the battle of Fort Wagner in South Carolina. The Color Sergeant fell, Carney threw away his rifle and seized the colors and dashed forward in the face of the storm of short and shell, until he reached the top of the parapet into which he drove the staff of the flag and lay down behind it, and for nearly an hour held it there until at length he found out that he was the only one remaining, all others being shot or driven back.  Not being willing to surrender himself or the flag, despite his need of medical attention, according to the newspaper, would only surrender it to a member of his regiment and once the flag was handed over Carney was celebrated for his bravery.  It took nearly forty years for William H. Carney to receive his Congressional Medal of Honor for his bravery.[v]  There are 8 marble plaques and two bronze reliefs in the shape of a shield and a square on the pillar supporting the statue, commemorating either individuals or organizations that had something to do with the building of the memorial (see pictures below). 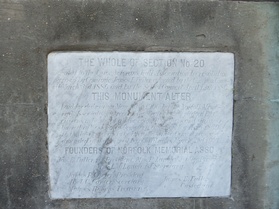 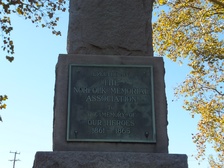 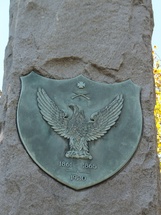 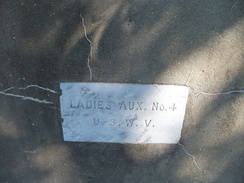 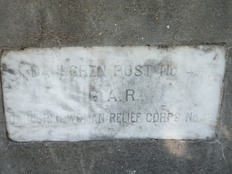 Dahlgren Post No. 4 G.A.R. and Dahlgren Woman Relief Corp No.4 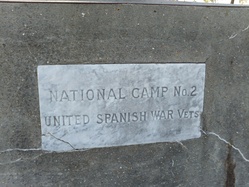 The picture below is of an African American reunion of the Grand Army of the Republic (G.A.R.) ca. 1910 in Norfolk Virginia believed to be taken in the black section, West Point Cemetery, of the Elmwood cemetery which, as shown, is separated by a wall.  The picture has 41 men and some of the veterans of the black Union regiments recruited from the Virginia area during the Civil War, some of there uniforms and insignia are G.A.R.   The lithograph broadside stated “Soldier’s Memorial/ Spanish American War of 1898”.   The G.A.R, which was a fraternal order that provided assistance to veterans they also had a women auxiliary, was a racially segregated organization and since black veterans were not able to join in the activities or white posts, they started their own.  For example, in 1900 there were three black posts in Norfolk,[vi] which can be seen depicted on marble plaques on the civil war monument in West Point, the Cailloux Post No.2, Dahlgren Post No. 4, Shaw Post No. 5.  The graves of the soldiers are arranged in three neat rows surrounded by five Sycamore trees with the monument in the center.   Councilman James E. Fuller did not live to see the monument completed; he died in 1909 and is laid to rest at the base of one of the Sycamore trees.  Thanks to the efforts of the National Memorial Association, various organizations, women’s auxiliaries, churches, lodges, and social organizations, the memorial was finally completed in 1920. 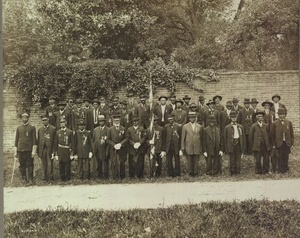 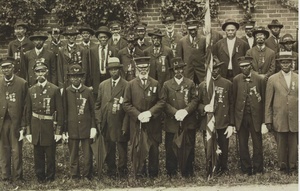 Newspapers such as the Virginian-Pilot in January 11, 1912, reported that some graves in West Point Cemetery have been removed over the years to other cemeteries such as Calvary cemetery and The Mace, July/ August 1979 issue reported the cemetery was restored and maintained by a black Masonic lodge on memorial day where there would be many individuals and organizations that would go to decorate graves along Princess Anne Road.  Today, many of the graveyards along Princess Anne Road require restoration; West Point is in serious need of restoration, although the memorial has been maintained, there are many tombstones in need of restoration.  Also, if you look at the grounds, they differ from Elmwood in that many people who buried their dead here didn’t have the money for elaborate tombstones or mausoleums.  There are many cluster of headstones, which doesn’t mean the space between these clusters is empty instead there are many unmarked graves some, because their markers were made out of wood or whatever was affordable, deteriorated over time.   Unfortunately, as shown in the pictures, the remaining headstones and mausoleum are in need of preservation.   The Norfolk Society for Cemetery Conservation is an organization dedicated to the preservation and conservation of Norfolk’s historic cemeteries.  Various volunteer events are sponsored to maintain the cemeteries, many monuments and mausoleums have toppled, sunk, and / or broken over the years.   A cultural resource management assessment undertaken in 2012 revealed monuments that have been displaced within the cemetery and the location of the interred is unknown. [vii]   Although West Point does not have many elaborate tombstones,  monuments, statues, and landscapes, if the community comes together to restore and preserve what is left of this historic  cemetery it will be a beautiful and long lasting historical record of African American history in the city of Norfolk.  For more information on volunteering or on the historical cemeteries in Norfolk visit the website http://www.norfolksocietyforcemeteryconservation.org/ 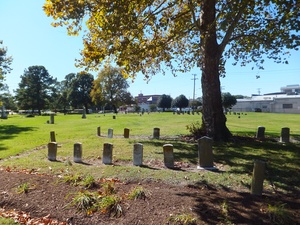 In the foreground the veterans in section No.20 under a Sycamore Tree and in the background burials of African Americans some arranged in clusters 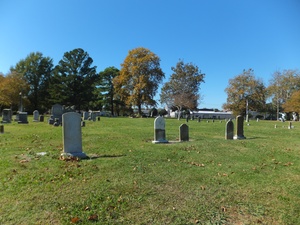 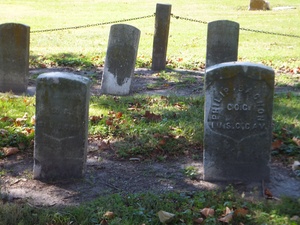 Veteran tombstones in Section No. 20 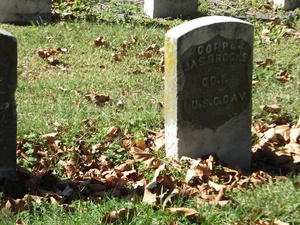 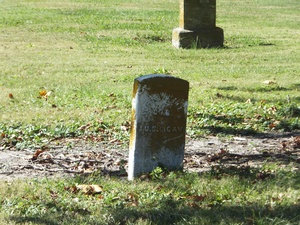 Veteran's tombstone, notice the shift or sinking to the right this is a minor case of  what many of the graves are experiencing

[i]  The Ordinances of the City of Norfolk and Acts of Assembly of Virginia:  Relating to the City Government, with an Appendix 1885,  (Norfolk, Va. Landmark Steam Printing House, 1885), pgs. 33-35

[iii] Standing of the Precipice of Change : Race, Slavery, and the Civil War in Hampton Roads,  http://www.chrysler.org/files/resources/precipice.pdf slide 32,