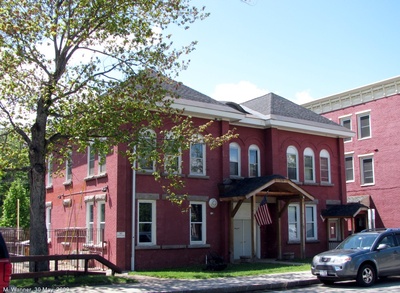 Other information: It was built on the site of Saranac Lake's first hotel, built by Captain Pliny Miller.

10 Main Street served as the village offices until 1986, when they moved across the Saranac River to the Paul Smiths Electric Company building.

It was also the site of the pump house for the village water system. (See McKenzie Pond)

In December 2012, it became the home of Active Motif, a biotech firm.

Arthur Monty a fireman employed at the temporary pumps used to keep the water out of the excavation being made for the foundation of the new water works pumping station on Main st opposite the Riverside Inn was severely burned by steam and hot ashes Saturday afternoon. Low water in the boiler caused the safety valve to burn out letting what water there was in the boiler into the firebox, causing a slight explosion. Monty was standing in front of the boiler at the time, and his chest, arms and lower limbs were badly burned. An alarm of fire was turned in but before the department arrived the employee's of Stark's Bottling Works next door to the boiler room, headed by Henry Smith had extinguished the blaze. Medical aid was promptly summoned. Dr. Russell dressed the burns and made Monty as comfortable as possible under the circumstances, he was then removed to his boarding house.

SARANAC LAKE - Village officials have less than a month to find a home for village office space. They hope to find it at the former Niagara Mohawk building on Main Street.

They must move by Sept. 15 when repair work starts on the foundation off the village office at 10 Main St. Four rooms of equipment and six village employees must be moved.

While packing up, officials also hope to find office space that meets mandates for handicap access. The present office is not accessible to the handicapped because it is located on the building's second floor and entered only by a steep, narrow stairway.

The village is also being forced out of 10 Main St., because work must be done to get ready to install a hydroelectric power station.

DePuy would like the move to be to the Niagara Mohawk building. He says it has room for the police department and community development office. The latter office is now located at 38 Main Street. Police headquarters are at the Harrietstown Town Hall.

"The police department situation is terrible," DePuy says, noting space is limited and officers must go through the auditorium to get to their lockers.

For many months, the village has been trying to take over the building by eminent domain proceedings. Village officials argue it would be in the public interest to own the property which includes a building wall along the Lake Flower Dam. That wall forms one side of the village-owned dam.

Since it would not be economical to own a vacant building, the office move is suggested.

DePuy said the village might also install another hydroelectric generating unit there.

For now, DePuy said Community Development Officer David MacDowell is trying to find a way to move the village offices before an eminent domain decision is made.

No Move to Town Hall

DePuy is less enthusiastic about a move to the Harrietstown Town Hall. It has been suggested the village rent office space there from the town.

"We'd be a tenant. We'd always have to contend with what they want to shove down your throat," he says. He also believes the village could be asked to help with costs to install an elevator and stairway to the town hall's second floor.

The second floor has been closed to public access for about a year because it does not meet fire code standards. Town officials have approved a $212,000 renovation to meet both handicap access and fire code rules.

DePuy also points out most villagers live in the Town of Harrietstown and so, "Village residents own 70 percent of the building." They already pay for town hall upkeep through their town taxes and it would not be fair to ask them for monies through their village taxes, he argues.