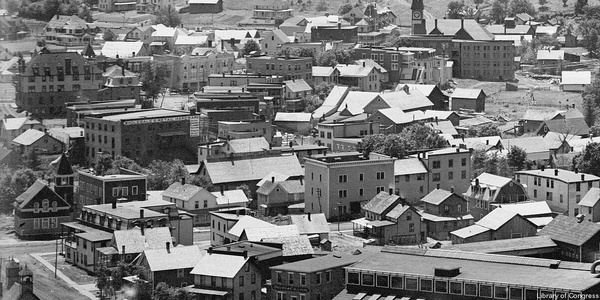 Bloomingdale Avenue from Mt. Pisgah, 1902. The Baptist Church is at left, directly across Bloomingdale Avenue from the Grand Union Hotel; immediately to its right is Finnegan's. Further right, about the center of the photograph is the Leis Block, before its front was extended, or its cure porches added. At bottom right is the mill of Branch and Callanan. 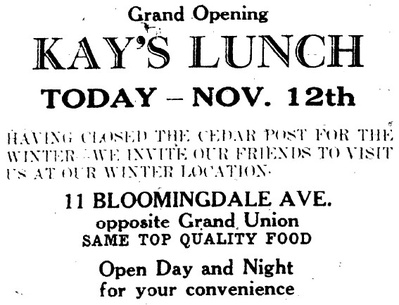 Other information: This was a three-story building that housed a number of businesses with apartments on the upper floors. On the 1924 Sanborn map, this address is labelled "Undertaker" and Marie Leis Pearce in Henry P. Leis: The Man from Saranac Lake, p. VIII, 9, describing a photograph of Bloomingdale Avenue taken from the top of the Alpine Hotel identifies the building as "Finnegan's Funeral Parlors and furniture store". In 1925 it was the home of Thomas and Agnes Finnegan, and of George W. Finnegan.  And in 1967 it was the site of a store and warehouse belonging to Roland Patnode.

She is survived by one brother, William Offik, of Albany, her sister-in-law. Miss Agnes Finnegan, a niece. Mrs. Payne Johnson of Fairfax, Va. as well as many many cousins.

The Funeral Mass will be offered at St. Bernard's Church Thursday at 5:30 a m. A Rosary Service will be held Wednesday evening at 8:15 a.m. the Keough and Son Funeral Home.