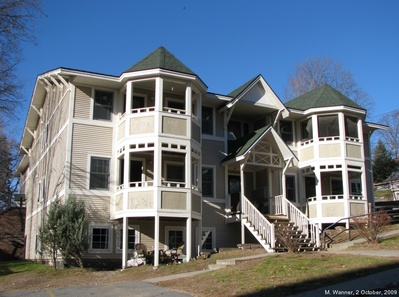 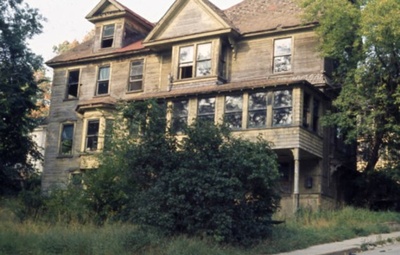 14 Helen Street from the southwest, c. 1977
The Barbara Parnass Slide Collection
For a photograph of this house on this site
as it looked in its heyday, click here.Year built: A house was built here before 1899; it burned and the present apartments were built on the site c. 1979.

The original house at 14 Helen first appears on the earliest Sanborn map showing this block of Helen Street, dated 1899.

The new building on the site: Tamarack Houses, an apartment complex built by Peg Roy to accomodate the medical staff of the 1980 Olympic Winter Games in Lake Placid. In 2014 this 12-unit building is called the Helen Hill Apartments, and is managed by the Adirondack Housing Development Corporation. See the Adirondack Daily Enterprise, March 28, 2014, for details.

Other information: An April 25, 2001 photo caption in the Adirondack Daily Enterprise reads "This abandoned apartment house at 14 Helen St., Saranac Lake is being reconstructed by ComLinks Community Action Agency to provide six working families with affordable accommodations. A nearby building at 9 Front Street is being similarly rehabilitated."

The "abandoned apartment house" referred to above was not the same house shown in the historic photo link. The vacant historic house burned in the late 1970s. On its site, Peg Roy built a new, multi-unit building as Olympic housing and later used for student housing. This later building is the one ComLinks remodeled.

The two, six-unit apartment buildings at 25 Helen Street and 47 Front Street (current numbering system) are now (January 2013) called the Helen Hill Apartments, and are being managed by the Adirondack Housing Development Corporation. (See article in the Adirondack Daily Enterprise, January 30, 2013.)

The del Prado family of Havana, Cuba stayed at 14 Helen Street in 1920. TB Society records indicate that the oldest daughter, Sara, came for the cure in 1918. Accompanying Sara were her father, Felix, a congressional representative, her mother, eight siblings, two aunts and three servants.1

The Thomas Hennessy family occupied 14 Helen Street from 1956 until 1969, when they moved across the street to 15 Helen Street.

Mary Hennessy, the 12-year-old daughter of Mr. and Mrs. Thomas Hennessy, of 14 Helen st, had seen Brad MacDowell, 7 years old, step into water over his head at 2:30 o'clock. Mary, an Enterprise paper carrier, raced into the water and pulled the boy to safety. Brad was able to stand after his feet could touch the sand and, with Mary, he staggered to the shore where Tom Condon, 18, gave him artificial respiration Brad went home an hour later with his father and the other four children in the family.

1. TB Card and US Census, enumeration for Franklin County, Town of Harrietstown, 1920.