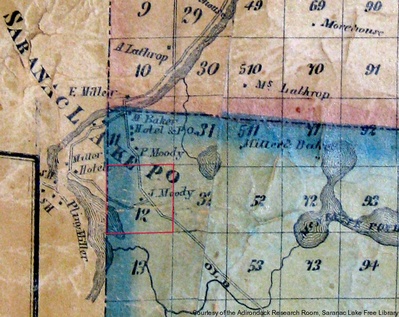 1858 Map of Essex County. Military Township 11, Lot 12 is near the center of this detail; the lot's outline has been emphasized. Address: 42 Brandy Brook Avenue

Pendragon Theatre, housed in a former barn at 148 River Street, was likely subdivided from this homestead.

Other information: This is the second home of the family of Jacob Smith Moody, the first settler in Saranac Lake. He built a log cabin in this vicinity about 1819; he built this house some years later. Benjamin O. Moody was born in this house in 1874.

This house was built on part of Lot 12, Township 11 of the Old Military Tract, the original 160-acre parcel purchased by Jacob Smith Moody about 1918.

On November 7, 1836, Jacob Moody deeded the northernmost fifty acres of his 160 to his son Harvey Moody, who built a half log/half clapboard cabin and a small log smithy on the property.

Jacob's remaining 110 acres, that contained a small part of Lake Flower, was lost through an unpaid indebtedness to the heirs of Newell Reynolds in 1841; it sold at auction to Phineas Norton for $71.38; Norton sold the land to Jacob's son Smith Moody in 1843 for $110.

The Benjamin R. Moody homestead at 150 River Street has been sold to the General Ice Cream Corporation, which will erect a large plant on the property.

1. An advertisement in the August 22, 1972 Adirondack Daily Enterprise announces the sale of the Sealtest Ice Cream Building, 154 River Street, to Dr. Lopez, who will be moving from his present location at 12 Dorsey Street. The Saranac Lake Veterinary Hospital will soon open at its new location."