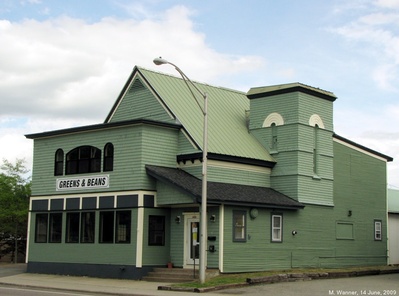 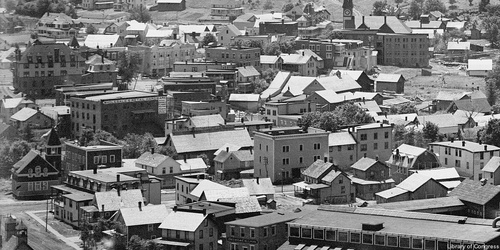 Today the Saranac Lake Baptist Church is located at 490 Broadway. Pastor Harold Clark and his wife Sue spoke about this new Baptist Church for an interview in the Enterprise on November 11, 2009: "The Saranac Lake Baptist Church had been started in 1968 by Pastor Thom Duncan of the First Christian Church of Brushton, our home church. The pastor before us left in September after just three months here, so there was a need."  When the Clarks arrived in Saranac Lake, the church was meeting in a trailer at the current site. "We lived in the house on Olive Street which had been bought as a parsonage by the church for its first pastor, Thom Duncan, until we built the new parsonage in 2004," said Sue Clark. In 1979, they began work on the current church building, Harold explains: "We already had the 3 acre lot and the trailer. During the summer of 1979 we built the current building on the existing lot. The foundation had been laid earlier, and on the 4th of July, 1979 we started to build. The night before, 3 inches of snow fell on Whiteface. That summer, many church groups from other states came here to help us build. The building was up in two weeks. The older kids helped us finish with putting the remaining shingles on the roof." Sue adds: "We pushed to have the building finished quickly because we were asked to house ministry teams for the 1980 Winter Olympics."

—It is said the erection of a Baptist church at Saranac Lake will soon be commenced.

—The Baptist church property at Saranac Lake has been sold for $3,500. The new owner will probably transform the building into a business block.

Knights Of Columbus Given Roller Skates

Through the offer of Mr. and Mrs. Robert McHugh, Fairground Skating Rink, Watertown, the Saranac Lake Knights of Columbus will be given 150 pairs of skates for use when its rink is ready for an early Fall opening.

The skates will be reconditioned as will an additional 150 pairs the organization has been promised. K. of C. members work nightly on volunteer construction of the 50 x 90 ft. rink at 15 Bloomingdale ave.