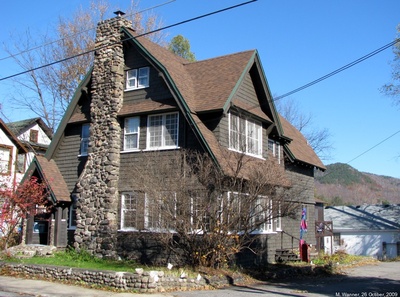 Other information: On August 20, 1908, Eugene DeLaMater sold Lot 3 in Block A, shown on the George T. Chellis subdivision map of 1892, to Nettie E. White. She was probably the builder of the house that stands today at 118 Shepard Avenue.

It's clearly a designed house, and Scopes & Feustmann were likely the architects. The index that survives from their firm shows jobs for "White, G. V." and plain "White," both in 1908. This identification is strengthened by comparison with other houses they are known to have designed. One particularly distinctive feature is the softening break in the line of the front-facing gable, also seen on the Pomeroy Cottage at 26 Baker Street. A number of other architectural details are similar to those in Scopes & Feustmann's cottage for Dr. Albert H. Allen at 22 Catherine Street, for which their signed plans have survived. In each house, a massive stone chimney is an important focal point of the facade. In each house the principal rooms have continuous horizontal trim connecting the tops of window and door moldings — an unusual treatment — and similar doors with an unusual pattern of paneling. A handsome cut stone fireplace in the living room at 18 Shepard features a large keystone projecting down into the arched opening; the brick fireplace at 22 Catherine Street also features an arched opening with an oversize, projecting keystone. William Scopes first began practicing on his own, designing the St. Armand Town Hall in Bloomingdale, in 1903, the same year he invited Maurice Feustmann to return to Saranac Lake, where he had cured from about 1899 to 1901, and become his partner. The firm of Scopes & Feustmann was productive and long-lived, designing cottages, civic monuments and sanatoria in Saranac Lake and elsewhere.

According to the deeds, William C. White inherited 118 Shepard Avenue from his wife Nettie, who made a will on November 24, 1909, that was admitted to probate on December 8. On April 29, 1911, the White Cottage is listed in disinfection records. On May 20, 1911, William White of Buffalo sold the house to Frederick William Egler, Jr. and Elizabeth A. Egler. In September, 1920, Elizabeth A. Egler of New York sold all of Lot 3 and the south half of Lot 4 to Jennie F. Krekell and her daughter Freda Gertrude Krekell. On May 1, 1933, Mrs. Krekell and her daughter, who by this time had married James Mack of the Saranac Lake Troy Laundry, borrowed $1,050 from the estate of Irving B. Asiel, using the house as collateral. On March 24, 1939, Jane S. Krekell died, age 76; a widow (occupation: housekeeper) who had lived in Saranac Lake for 22 years, she was buried in Pine Ridge Cemetery. On February 11, 1947, James Edward Mack and Freda G. Mack bought the two vacant lots at 20 Shepard Avenue from the Village of Saranac Lake, which had acquired them for unpaid taxes from the C. E. Sladen estate the previous April.

In 1947 the following listing, one of five in Saranac Lake, appeared in Lodging for a Night. A Duncan Hines Book: "Guest House: The Mack Cottage, 18 Shepard Ave. Open all year. A homey place for travelers. 18 guests." The Mack Cottage operated on the European plan and offered breakfast. Rates were $4.00 for a double room with private bath and $2.50 with shared bath.

in 1962, Dr. Malcolm Roberts and his family lived at 18 Shepard Avenue.

From research for the owner by Mary B. Hotaling, February 1996

2010-02-11 15:07:42   My full name is Tanda Rae Heil Weimer. I lived in SL from Oct. 1980 till 1986. We lived on 18 Shepard Ave. It was the old Duso home before we bought it. It was right on the corner. A big yard and brown three story home. Great memories. When I was a senior at SLHS I was on the court for Winter Carnival 1982. I graduated in 1983. My parents names are Gary and Joyce Heil. My dad worked at the Raybrook prision after the olympics and my mom worked at the Trudeau Inst. I will look for a picture of our home. I have gone back a few times and took pictures of the home. Such fond memories of SL. I would love to move back but my husband says "We don't have to shovel sunshine in AZ" ha. Thanks for this awesome website. :)