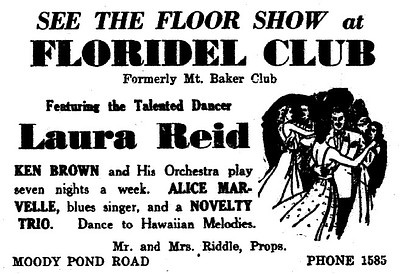 Places with an orchestra and dancing included:

Those with a victrola and dancing included:

The invasion of Northern New York by 6,000 Veterans of Foreign Wars and their auxiliary companions for the most stirring conclave ever held in the northern part of the state will open in Saranac Lake on Wednesday when the boys who have seen service in foreign campaigns of the United States gather for their 18th annual encampment.

The meeting will bring together posts and councils from every county of New York State for discussion of affairs important to veterans, their wives and children and every other citizen of the country, which is contained in the V. F. M. [sic] 5-point program.

In the uniforms of their various posts, the veterans will advance on Saranac Lake to the tune of 20 musical units from the organization that will fill the air with martial music reminiscent of World War days.

The encampment will open at Pontiac Theatre with a solemn memorial to those who have died in military service of the United States. This impressive ceremony will be open to the public and will unfold the colorful ritual of the organization to commemorate the memory of those who laid down their lives for their country.

An equally colorful event will bring the encampment will close when the entire convention gathers in full regalia for the military ball on Friday night. Prizes won at the musical competition for bands, fife, drum and bugle corps and women's drill teams are to be awarded there.

The musical competition will be a highlight of the encampment at the municipal field on Friday morning at 10 o'clock. More than 26 musical units of the V. F. W. will compete for cash prizes amounting to $1,000. The encampment parade, the most picturesque event of the conclave, will get under way at 7 p.m., Friday, and will be led by the 26th U. S. A. Infantry band and regiment which will be followed by a mounted division of Troop B, New York State police.