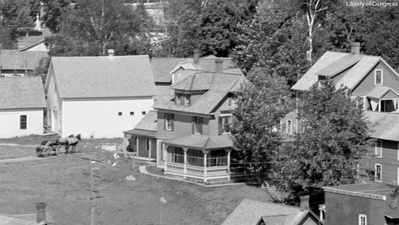 20 River Street, 1909. River Street runs between the house at center and the buildings at lower right. For the full photograph, see Saranac Lake Village, c. 1909, or see Riverside Garage for a closer view. 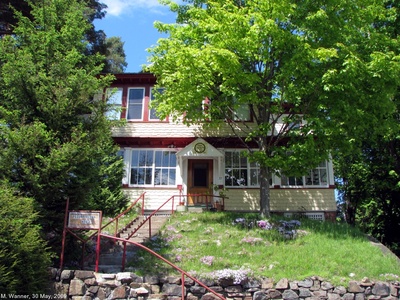 Other information: According to the 1916 TB Directory, the Farrell Cottage, run by Dr. John A. Farrell, had room for 3 patients and charged $15-30 per week.

It was run by Mrs. Mildred Lawrence from 1929 to 1942. In March 1941, Lester Pete, of Wellsville, N.Y., had been with the Erie Railroad, retiring 15 years previously, after 23 years' service. He was staying at 20 River Street when he was mentioned in COTTAGE CALLS, an article in The Guild News. [See 58 Riverside Drive and 3 Park Place for more on railroad men.]

A prayer group from St. Bernard's, incorporated as Children of the Resurrection, bought this house in 1986 as a retreat house for anyone needing private time for contemplation, prayer or study. The building had previously housed college students. In 2016 the Saranac Lake Ecumenical Council has received permission to use the house as transitional housing for homeless people; the facility will be operated and staffed by Lakeside House.