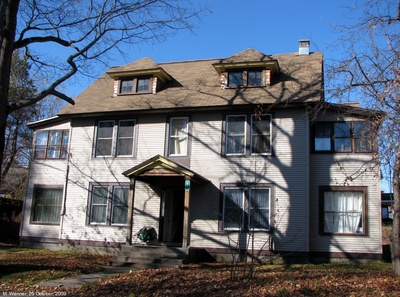 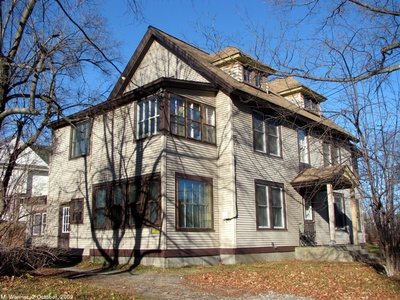 Other information: According to the 1916 TB Directory, the Daigneau Cottage, run by Miss Daigneau, had room for seven patients, had two cure porches and charged $13-25 per week.

There was another Daigneau Cottage at 48 Helen Street.

The village directories list Arthur Daigneau as residing here from 1933 to 1954; from 1962 to 1969, Helen Donnelly is listed as resident.

From the NRHP form: This two story eaves-front Colonial Revival-style dwelling of wood-frame construction has two recessed hipped-roof dormers on the Helen Street side and two story full-width porches on each end which have been partially enclosed. Symmetrical façade; small entry porch flanked by paired windows on both levels. Vinyl siding, mostly vinyl windows, and wood windows corresponding with the porches; asphalt roof.  The overall massing, form and fenestration pattern remain intact.