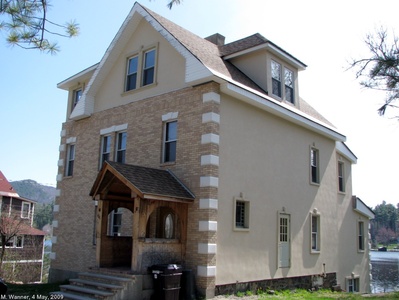 They're just the right number to start a baseball team, they'll tell you. They are all members of the Brotherhood of Railroad Trainmen. They have tuberculosis, and are taking the cure in Saranac Lake.

Their former jobs, they say, were more routine. Nothing ever happened. There was, of course, a little circumstance in which one of them, a flagman, was knocked off the rear of a Delaware and Hudson sleeper, on the run from Auburn to Binghamton.

The train, backing, simply ran over him and pinioned his body underneath. Cotter pins and other gear stripped every stitch of clothing from him. He broke both shoulders, both arms and all his ribs. He spent 14 months in the Fox Hospital, at Oneonta. But, of course nothing ever happens to a trainman.

They don't mind talking shop. But the outsider is not likely to glean much from their conversation until he's mastered their idiom.

The "brains" for example is neither a thinking apparatus, nor the head of a gang of kidnappers. He's the conductor. The engineer is a "hoghead"; the fireman, "tallow pot"; officials, "brass hats"; car inspectors, "car knockers"; and a rail walker is known as a "gandy dancer."

The trainman himself is called a "shack," but if he's a beginner, he's designated as a "student." A yard master is a "fixed signal"; and the caboose is the "hack." If you ever want a trainman to cut a freight car off, you simply tell him to "hit the deck."

In this slang, they spin some lively tales of wrecks, fires and daily emergencies, in which their skill and fast thinking have played a large part in averting those gruesome accidents which make headlines in newspapers throughout the country.

To a man they are proud of their financial independence in Saranac Lake. Three percent of all their earnings, paid into the Brotherhood, have assured them of care here without reliance on help from their families or others.

They've had varied, and in some cases, long experience with the roads on which they've worked. One of them who has been with the New York, New Haven and Hartford, entered the service at 14 [?], He lied about his age, of course. It was only straightened out 35 years later when he was eligible for a pension.

Four of the nine live at 58 Riverside Drive.

William Holder is one of them. He's been here two years, having contracted tuberculosis after 20 years' service with the Staten Island Rapid Transit, a branch of the Baltimore and Ohio.

John Youngblood is an old-timer in Saranac Lake, having cured here since 1925. He has seen close to 40 years with various roads, among them the New York, New Haven and Hartford.

Thomas Smith and Joseph Riley, who have both been here two years, expect to go home soon. Mr. Riley was with the Central Railroad of New Jersey, and Mr. Smith with the Erie. . . .

[This article continues with mention of railroad men curing in or near 3 Park Place.]