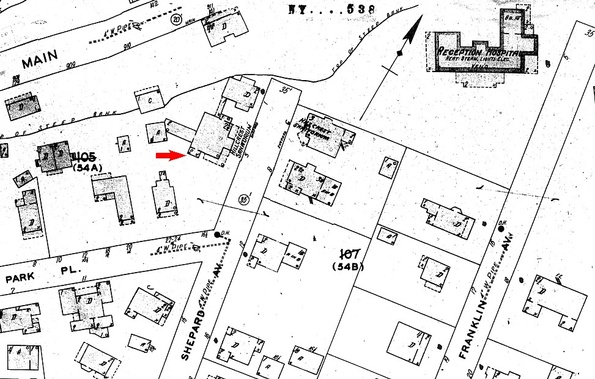 Hillcrest, on Shepard Avenue, was listed in the 1902 Directory.

HILLCREST COTTAGE, 5 Shepard Avenue: For all classes of cases. Capacity: 11. Rates:—$12.00 TO $20 per week. Proprietor:—Mrs. E.H. Jones. Application should be made to the Proprietor.

According to the 1916 TB Directory, the Chapman Cottage, run by Mrs. Livingston Chapman, had room for twenty patients, had six cure porches and charged $12.50-26 per week. It also is listed in the Disinfection Records in 1928. Chapman operated it until 1938.

The 1931 Sanborn map shows it connected to 1 Shepard Avenue, and labels it the Hillcrest Sanatorium; 6 Shepard Avenue across the street was used as an annex. It is missing on the 1961 map. The address shows up in newspaper advertisements through 1957.

Bill McLaughlin identified this cottage as the place where Eddie Diamond, Legs Diamond's brother, cured. Arthur Wareham is also said to have cured there in later years. It may have been called the Agnew Cottage then.

Five Shepard Avenue was operated as the Hillcrest Cottage by Livingston Chapman in 1933 and '36; it was operated by Mrs. Regina Shults as the cure cottage for employees of the duPont Company from about 1938 to 1952; employee Arnout Hyde cured here starting on November 28, 1944 to late 1945 or '46. A reader commented that the Shults Cottage at this address was managed by Regina Shults, who had an adopted daughter named Peggy. One of the patients was Inez Simpson; her son Barry Simpson currently (January 2016) resides in Lake Placid. The cottage was completely destroyed by a fire and not rebuilt.

The 1908 City Directory lists Frank H. Camperson at 5 Shepard Avenue. However, a patient card exists for Frank H. Camperson from Wilmington, Delaware, dated 12/31/1908, at "1 Front St.", Saranac Lake. As Wilmington is the original home of the duPont Company, it seems likely that the cottage was associated with the company from the beginning.

"This month, the visiting News reporter stopped at the Anthony Shults cottage, 5 Shepard Ave., and discovered not only a group of interesting patients, but many things about the house itself. The cottage is partially owned and maintained by the DuPont Company for the benefit of their employees. Nursing care is provided for those who need it, and all the patients are under the supervision of Mr. Shults. Dr. Francis B. Trudeau is responsible for the medical care of the DuPont people. When vacancies occur, other patients are admitted, and a few of these are living there now.

Recognizing the value of hobbies to a successful cure, the company has provided an impressive Leica camera and a darkroom complete with all the paraphernalia for developing pictures and enlarging them.

Making the rounds of the house, we met John Wilkinson of Wilmington, Delaware, who since coming here eight months ago has succumbed to the house craze for gin rummy. He also reads a lot, and is partial to stories of the wild and wooly west. Mr. Wilkinson has not neglected his curing, however, for he expects to return to his position as superintendent of the DuPont telegraph office next month.

Frank Allen is another DuPont man, from the accounting department in Pennsgrove, New Jersey. It was from Mr. Allen that your reporter finally learned how to put a fully rigged ship in a bottle. We won't reveal the secret here, but we were amazed at what skill, patience and a few simple tools could do with a piece of balsa wood, a few throat applicators, drawing paper, thread and glue (DuPont, of course). Mr. Allen has set himself the task of constructing a complete set of all types of sailing vessels, from packets and sloops to clippers, each made according to scale and accurately rigged. To date the pride of the collection is a clipper carrying thirty-four sails. Nor is Mr. Allen's interest confined to sailing vessels. When he came here last fall, he left behind a partially completed gasoline-powered model airplane with six-foot wing spread. A Boy Scout leader at home, Mr. Allen has arranged to continue his study [of] scout work by mail.

Clarence L. Wagner came to Saranac Lake via Buffalo and Wilmington, Delaware. Another fugitive from an accounting department, Mr. Wagner is especially interested in freehand drawing. He has been studying art at the Guild, and has done much fine work there. One of the most consistent users of the "darkroom," he not only takes excellent pictures, but develops his own film. Seven large war maps, showing every part of the world, are mounted, and cover one wall of his room. Here, with colored thumb-tacks, he records the tides of battle now sweeping over the earth. Long active in Guild activities, Mr. Wagner has now become a member of the teaching staff, and offers a course in accounting this semester. As a graduate of the Wharton School of Finance and Commerce at the University of Pennsylvania and with two years graduate study at the School of Education at the University of Buffalo, Mr. Wagner has a fine academic background as well as practical experience for his teaching. Mr. Wagner is another of the gin rummy devotees -- in fact the house is full of them, but try as she might, this reporter couldn't discover just which one is "The Champ."

The latest arrival, Benjamin Harrison [not the president], came from Arlington, New Jersey and has only been here a few weeks. Secretary to the production supervisor of the DuPont plant, which makes plastics, Mr. Harrison was also the organizer and secretary of the Credit Union in his company (a loan service for the employees), and hopes that he will soon be able to take advantage of one of the Guild's classes in bookkeeping, to help him in that work.

For a more complete picture of William Thaler, we would refer you to The Guild News of September, 1941, where, under the title "Busman's Holiday," you find the story of a young Swiss hotel apprentice who came to this country in 1926, learned English in night school, entered the hotel business, and ended up as chief steward for Pan American Airways. Having completed the Guild's course in dietetics, Mr. Thaler is now anxious to brush up on his Spanish.

Louis FitzPatrick, a native of Brussels, came to this country when he was [?] years old with his mother and sister. Since then he has lived in New York city, where he was connected with an investment company until he became ill. Reading has been Mr. Fitzpatrick's chief diversion since he has been in [bed] and the large book case which dominates one corner of his room is filled with ch[oice] volumes to whet the appetite (and envy) of any reader.

John Fisher came to Shults' last October from Flushing, Long Island. An art student, he worked in the display department of Macy's for a year before he became ill. Arriving in Saranac Lake, he continued his art study under Mrs. Ha[?] of the Guild, until trouble with his eyes forced him to drop it temporarily. Mr. Fisher finds most of his diversion at present in playing over the records in his excellent musical library. He has an especially good collection of records from the current musical comedies. Profiting from his own experience, Mr. Fisher has a "tip" to pass on to other patients who may be collecting records. Don't keep them on your porch, or where they will be exposed to the extreme variations of temperature so common here in Saranac Lake; it will crack and otherwise damage them. #

The cottage run by Anthony Shults Jr. was visited again and also appeared in The Guild News in November of 1943.

A radio down in the Dug way off Main St. very loud and disturbing his patients. We were unable to find any radio in operation on Main St. but music very loud at Elks Club. Called Frank Fitzgerald and asked him to close the windows and dim the music which he did.        Higgins & Jones