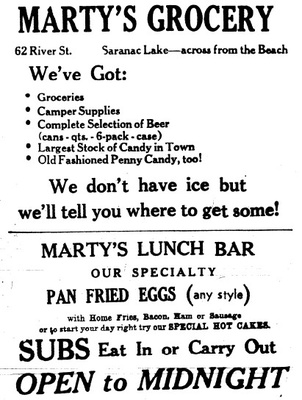 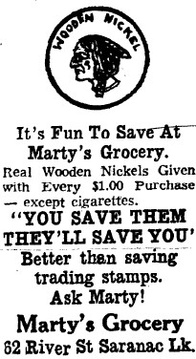 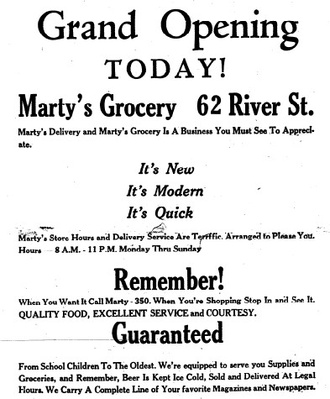 Other information: 62 River Street was operated as a grocery store from 1939 until 1950 by Mike Russell. It was operated as Marty's Grocery/Snack Bar/General Store from 1954 to the late 1960s, and as Wardner's Restaurant starting about 1972. Wardners also did furniture stripping. The building burned in 1974.

NOTICE IS HEREBY given that License No. GB 20797, has been issued to the undersigned to sell Beer, at retail, under the Alcoholic Beverage Control Law, at Donnelly's Grocery Store, 62 River St., Saranac Lake, Franklin County, New York, to be consumed OFF said premises.

SARANAC LAKE — Wardner's Grocery at 62 River St. and the apartments in the same building were ruined this morning by a fire that was discovered about 9 o'clock. An attached house escaped damage.

At 10:30 smoke puffed from holes chopped in the roof as well as from other parts of the building. Water poured down the center stairway and from the sill of the store. Inside some merchandise was still stacked neatly on shelves but other water-soaked articles had been knocked to the floor. Everything appeared smoke colored through the broken window.

Although the outside walls still appeared relatively intact, the stubborn fire had burned out the rear portion of the building. In spite of the torrents of water that had been poured into the building, at 11 o'clock flames were beginning to lick from the peak of the roof.

The fire was reported by George Nesbitt who is employed at Nadon's Service Station across from the store. He said he had seen smoke coming from the roof over the portion of the building that used to be a restaurant.

While Mr. Nesbitt called the fire department, Mr. Nadon (who is the first assistant fire chief) ran across the street to awaken the Wardners and other occupants. The fire station recorded the call at 9:10 a.m.

The Wardner family occupy one apartment, their daughter who is away, another, and at least one other apartment is rented to North Country Community College students. The former restaurant was used for a while for furniture stripping but that operation had been moved to Bloomingdale.

One of the students who lived in the house said he had been asleep and was roused by the general commotion and someone pounding on his door. Residents were assisted by volunteers who carried out the contents of the apartments to neighboring porches and garages. Fellow students at North Country Community College helped Mrs. Peggy Callaghan remove her furnishings and possessions from her apartment in the attached house.

One of the firemen remarked that the fire was hard to contain because the structure consisted of a number of additions and inside there were many partitions and some false ceilings.

Both pumpers were at the scene. The large one tied into a fire hydrant directly across the street and the Snowflake was parked behind Nadon's pumping water from the lake. Lake Placid Fire Department stood by at the local station.

Among those at the scene were Village Manager Gene Schiller, Chief of Police Gerald Oxford, other members of the police force, who directed traffic through Church Street or Shepard Avenue, and a State Police car and trooper.

Chief Oxford said that the cause of the fire and its original location had not yet been determined but that he would go in with the fire chief as soon as possible.

Mr. Schiller pointed out that the village maintenance program was paying off today, with all of the fire equipment in good working order.

Herbert Wardner, the owner of the building since the fall of 1971, was not available for comment. He evidently had been working to remove some of the contents of the building and when he stepped in the street to view the smouldering building his jeans and sweatshirt were covered with soot: He appeared dejected and a young man, said to be his step-son, put an arm around him and they walked away together.