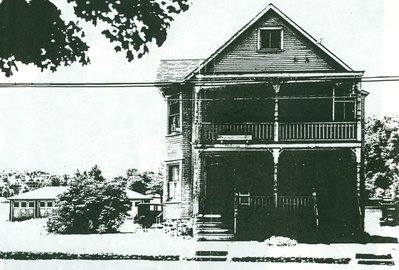 The two-story house at 63 River Street was located on Lake Flower, one-half block toward downtown from the intersection of Shepard Avenue and River Street. The Lobdell family lost possession after the death of their father in 1937, leaving nothing for his family. In a letter dated November 29, 1990, Dean Lobdell recalled a stone wall blocking off the front, or River Street side, of the cellar when he was a boy. On November 11, 2000, he wrote: "The house became a tavern and was torn down and the area went for the Parks you now have."

The following is excerpted from a partial copy of an unidentified newspaper clipping from about 1945, supplied by Mr. Lobdell: Workmen remodeling an old dwelling at 63 River Street dug up a flintlock rifle, a product of the Harper's Ferry arsenal, clearly stamped with the name of the arsenal and the year of 1827. The weapon is believed to be one of those collected by John Brown and his followers as they planned the tragic raid on Harper's Ferry. The same workmen also uncovered a lengthy tunnel believed to have been used by the abolitionist to hide slaves, to whom he was giving sanctuary, on his farm in North Elba, while they were waiting transportation across the Canadian border. Brown and his men were highly active in this section. Their secret meetings are clearly recalled by Thomas Peacock of Lake Street in Saranac Lake, who as a boy went with his father to attend the farewell to Brown, before he left on his tragic trip to New York city.

It also seems possible that the tunnel was constructed for use by bootleggers during Prohibition.

The following is a note written from Mr. Dean Lobdell to Mary Hotaling, date unknown;

I wish I could provide you with any more details as to the musket found in the cellar of our home at 63 River St. It was sold after we moved to California and I was in the army during WW2. I do recall a partial wall across the middle of the area and this must have concealed what was found in the tunnel. How I wish I had gone beyond the wall. The gun was quite valuable and since my Dad died in 1937 he left nothing for his family. We lived or existed on what my brother and I were paid for the delivery of the Enterprise. About $15 a month was our family income. The house became a tavern and was torn down, and the area went for the parks you now have. The news clipping is all I have, the gun was valued at $3,000 plus as I recall. Hope S.L. will always be there for me. Many memories are there for all of us. Thanks for contacting me. Sincerely, Dean Lobdell.