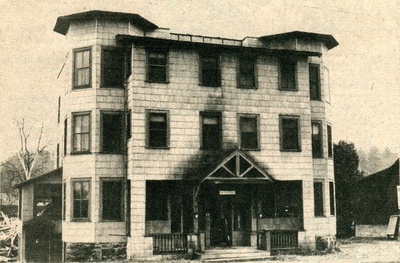 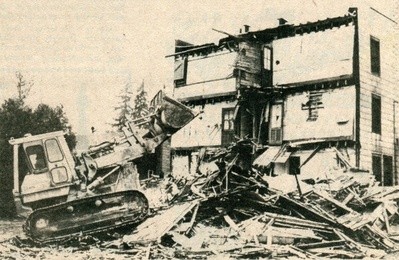 Year built: c. 1875 according to the account below, but that seems unlikely. It does appear on the 1908 Sanborn map, the earliest map to show that part of River Street

Other information: It was torn down in 1975, along with the Lakeview Grill, the Nadon Gulf Station, and a private residence, as part of the widening of River Street and the creation of the Riverside Park from the Prescott Park and the Lake Flower beach.

Mr. and Mrs. Jack Beardsley tell us that the house at 65-67 River St., which has just been demolished to make way for the new highway, was about 100 years old and was bought by Jack's father in 1943. The previous owner was Ray Williams (who may have been the same person as H. Ray Williams). It was called "The Pines" at one time and, unofficially, Heartbreak Hotel.

There were 20 apartments in the building. In 1971 and 1972 when the automatic locks were put in [on the Saranac River], the lake rose 31 inches to a disastrous flood level and the Beardsley apartment had to be vacated. Since the oil burners were inoperable, being under water, the tenants were living in freezing quarters and were caused great inconvenience. The State maintained that the house was built too near the water.

Next was the big apartment building owned by Mr. and Mrs. Jack Beardsley. Many of the residents have moved into either the Lake Flower Apartments or the DeChantal Apartments.

In a letter dated Nov. 29, 1990, Dean Lobdell wrote: "There was a large gray building called Beardsley Apts. next door to our house."