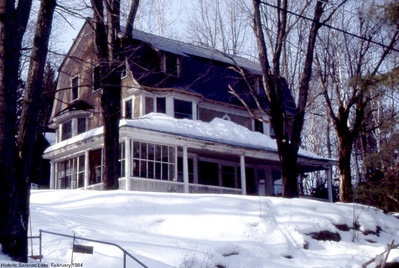 Other information: When this house was known as Balsam Manor, it was run by a Miss Picaso. Later someone named Gutshaw was associated with it. In 1910 and 1911, Mrs. Wilson ran it as the Wilson Cottage; after that it was vacant until 1915. 2

Behind the house is the Bartok Cabin, where Bela Bartok spent the summer of 1945, his last. At that time the house was rented to Ida and Maks Haar, who sublet the cabin to the Bartoks. Ida Haar was a native of Saranac Lake, the aunt of Lionel Arlan.

In c. 1963-64 the Arthur Thibodeau family rented this house from Mrs. Lina Manko. At the time, the Bartok Cabin was full of stored furniture.