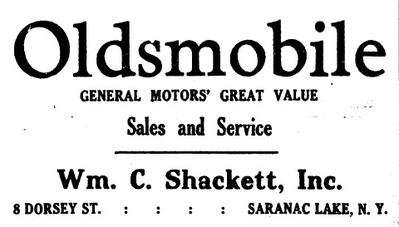 Other information: In 1926 William C. Shackett sold radio sets at 8 Dorsey Street; in 1933 he sold Oldsmobiles there.

Reported missing: from her home, 8 Dorsey st., Saranac Lake, where she lived alone, at 8 p.m. Monday, the body of Mrs. Katherine Hamer, 84, was recovered from Lake Flower at 10:30 a.m. Tuesday by Saranac Lake police.

Tuesday afternoon Coroner Harold Greenier of Bloomingdale issued a verdict of suicide, by drowning. He stated that death had occurred about 6 p.m. Monday. The body was released to the Fortune Funeral Home.

Mrs. Hamer, a resident here many years, was last seen alive by friends about 5 p.m. Monday. She was reported to have been despondent. Her disappearance to police was reported by a friend, Mary Mullen Wood.

Following an all night search of the village, Police Chief William Wallace and Patrolman Richard Jewtraw noted tracks Tuesday morning in the snow at the edge of the lake opposite 46 Lake Flower. Investigating they found her body fully clothed and in a black fur coat between a dock and a boathouse in about 18 inches of water.

Mrs. Hamer, a native of Germany, came to this village from New York City for her daughter's health. Her daughter, Miss Marian Von Brandt, died here in 1932. For several years she operated private sanatoriums in the village and her last business was a tourist home at 60 Lake Flower ave., which she sold after her health failed.