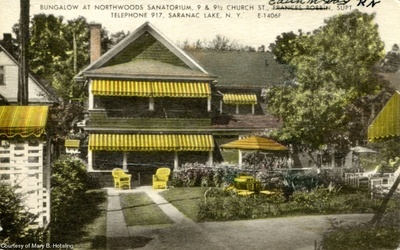 Other information: This small house was located in the back of the Northwoods Sanatorium lot. A postcard view of this house is captioned "Bungalow at Northwoods Sanatorium." It survived the fire that burned down the Northwoods on February 27, 1974, to be torn down later by Paul Smiths College in clearing the property to build their brick dormitory on Church Street. Four small, square diamond-paned casement windows from the Day Cottage (as it was later called for a family that lived there) appeared for sale in the gift shop in the Hotel Saranac.

This cottage was under contract to the U. S. Veterans' Bureau to take care of disabled war veterans.

In 1924, through the efforts of Dr. Edgar Mayer, all tubercular members of National Vaudeville Artists (NVA) who were patients in Saranac Lake were were moved under one roof, at 9 Church Street; Mrs. Frances Robbin was made superintendent of the NVA cottage. The following year, the NVA began planning for a new institution, the National Vaudeville Artists Lodge (later renamed Will Rogers Memorial Hospital); it was finished in 1929.

Elisabeth Widmer was living at what was then known as the Robbins Cottage when she met Beanie Barnet, who lived at the Johnson Cottage nearby on Academy Street. They were married in 1954.