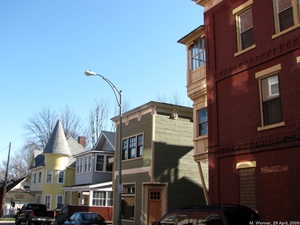 Academy Street from Main Street Academy Street is a short street that runs north from St. Bernard Street directly in front of St. Bernard's Church, to the rear of the Hotel Saranac, then takes a short dogleg west and north to Main Street. (However, it is a one-way street that runs the opposite direction, north to south.) It was named for the school that preceded the original Saranac Lake High School. 12 It had the reputation of having no residents with active tuberculosis. 3

A daughter of one of the Latin American patients, believed to be from the Serralles family, was married at St. Bernard's Church. The ceremony was remembered in Saranac Lake because a red carpet was laid for it, extending most of the length of Academy Street, between the church and the reception at the Hotel Saranac.