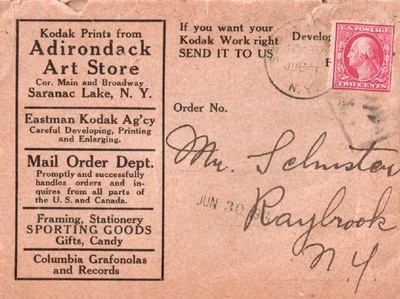 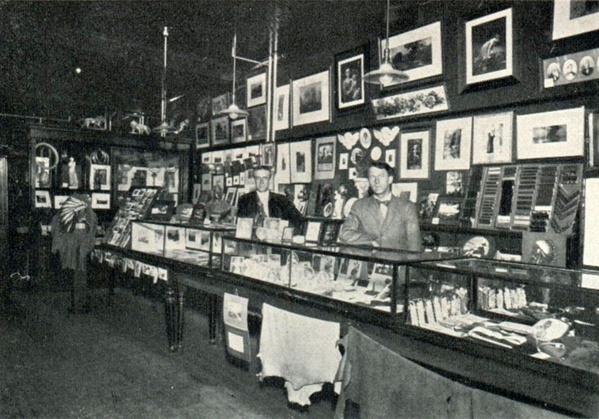 Lake Placid News, December 14, 1917 In 1917, the Adirondack Art Store, Inc., of E. B. Hay and Bertrand H. Gray, leased the space after E. J. Kennedy bought the Harding Block, their original location, at 89 Main Street. "Hay and Gray", as it was called, was the number one art and craft supply store in the village at the time; and Gray was evidently a close friend of the owner, William H. Jack, as he was a witness to the signing of Jack's will.

In addition to artists materials, they designed and manufactured a fishing lure that they sold at the store. The lures were made in the basement on a die-stamping machine purchased for the purpose.

The well known firm of Harding & Gray, proprietors of the book store, has been dissolved by the retirement of John Harding, the senior member, and succeeded by E. L. Gray & Co. The book store, one of the neatest and most attractive in Northern New York, was opened in 1900 by Mr. Harding. In May of the following year E. H. Gray entered the firm as the junior partner. Prior to that Mr. Gray had been in the office of the division engineer of the New York Central Railroad at Albany. Mr. Harding retires that he may give more attention to the hotel and resort business. He is the proprietor of the famous Algonquin Hotel on the Lower Saranac Lake, and secretary of the Adirondack Hotelmen's League. The firm of E. L. Gray & Co., who succeed Harding & Gray, is composed of E. L. Gray and B. H. Gray, his brother, who has been connected with the store for several years.—Adirondack Enterprise.

The best of everything for Hunters. Adirondack Art Store, Saranac Lake.— (Advertisement)

The Adirondack Art Store of Saranac Lake, the big gift shop of the Adirondacks, is going out of business, as their store has been leased to the Western Union. Prices of their $25,000 stock of gifts and sporting goods are slashed from 20% to 75%, as all must be sold at once. Christmas cards, books, framed pictures, stationery, lamps, smoking stands, ash trays, pocketbooks, skis snowshoes, skates, radios, photographs, office supplies, ammunition, and fishing tackle, all must go at a sacrifice. Adirondack Art Store. Saranac Lake.—advt.