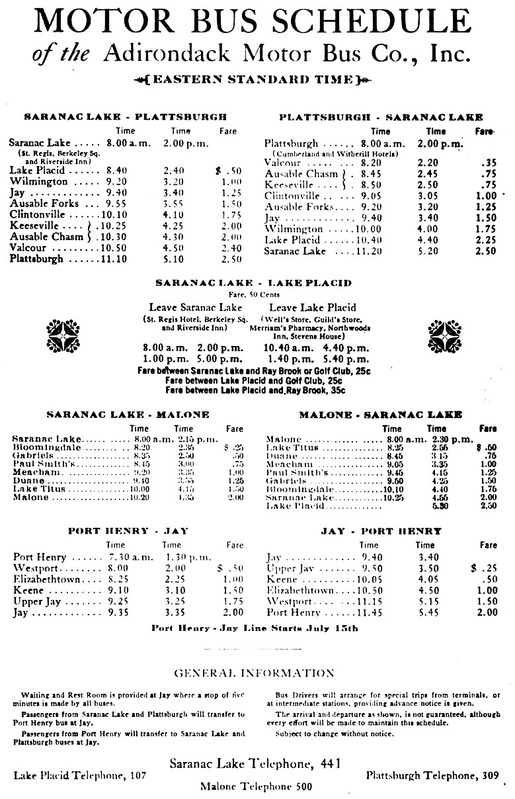 Would Merge with Champlain Bus Co.— If Approved by Public Service Four Large Buses Would Serve This Village

Elbert E. Bellows of Saranac Lake, president of the Adirondack Motor Bus company, and James L. Smith of Burlington, general manager of the Champlain Bus corporation, appeared before Public Service Commissioner George R. Lunn last week urging approval of the application to transfer certificates of the Adirondack company to the Champ lain corporation. The certificates to be transferred cover omnibus operations in and between the city of Plattsbugh and the villages of Lake Placid and Saranac Lake, also a Saranac Lake-Westport-Port Henry route.

Counsel for the Adirondack Motor Bus Company, Inc., testified before Commissioner Lunn that in the event the company's application is granted by the commission, the Champlain Bus corporation contemplates purchasing four new 25-passenger buses of most modern type, to accommodate the present customers of the Adirondack Motor Bus company. This latter company, it was testified, now uses 1930 and 1931 7-passenger automobiles over its routes.

In response to questions from Alfred D. Kelly, counsel for the Delaware and Hudson Railroad, Attorney Amowitz asserted that the Champlain Bus corporation does not contemplate any more competition with the D. & H. than there exists at present, although the company intends to furnish more adequate service on the present routes.