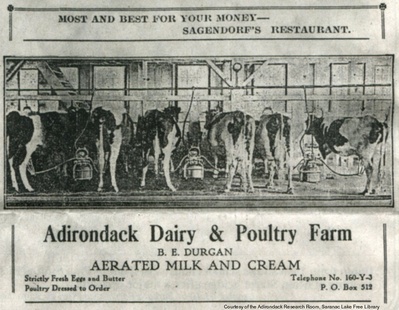 The Adirondack Dairy on the Harrietstown Road, also known as Durgan's Dairy, was the biggest dairy in Saranac Lake. It was started by Loren W. Durgan, from Peasleeville, New York, who married Betsy Zerona Westcott and bought that property. It was considered the biggest in the region in 1903, milking 100 registered Holstein cows. It was located on the hill behind today's Tissot Construction Company (2009), the site at one time of Durgan's Grill, and later a roadhouse named Club 86. The name was changed to Durgan's by son Ben Durgan when he took over the farm. The Dairy was sold to Ollie Bartz in 1930.