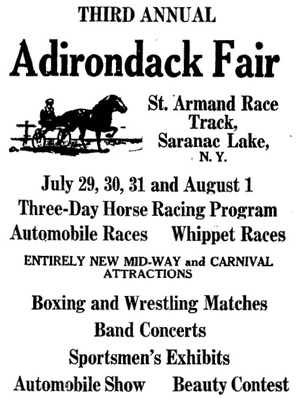 Plattsburgh Daily Press, July 15, 1931 The Adirondack Fair Association was founded by Francis B. Cantwell in 1928.

Phil Adler, race secretary of the Saranac Lake Driving Club, has announced the completion of the program of main events for the 8th annual ice harness meet which the club will hold during the coming winter. A total of $1700 in purses will be offered for competition of horses owned in northern New York, New England and Canada. The first day's races will include a 2:10 trot 1 and pace to be called the Saranac Lake village race for a purse of $250 and a 2:30 trot and pace christened Cane's Publishing Shop race for a purse of $200.

Judges of the racing events will be Dan S. Foster, U. G. Cane, Peter Patnode and Halsey Hickock. James A. Fortune will be the starting judge, and A. F. Short, timer. The races will be held on St. Armand race track of the Adirondack Fair Association and will be held under the rules of the National Trotting Association. The dates for the meeting have not as yet been definitely determined but will be either the latter part of January of the early part of February.

The officials of the Adirondack Fair association of Saranac Lake announce that they are preparing plans for their first exhibit and fair to be held at the St. Armand fair grounds on July 30th and 31stand August 1st, 1929. They have made extensive preparations for this first event and plans are rapidly materializing for a typical Adirondack Mountain exhibit to beheld this year and thereafter annually during the busy tourist season.

The association owns one of the most beautiful tracts of land in the vicinity of Saranac Lake with a half mile race track, grandstand, judges stand, barns and electric lights so that both afternoon and evening performances can be had. An open air boxing ring is a feature of the grounds and open air bouts have been held there last summer. It is possible several bouts will be staged tbis year during fair time.

The fair association has commenced the erection of a new barn and stable to house twenty trotting horses. The barn is being built adjacent to the track and will be about eighty feet long and, thirty feet wide. The construction of the barn is in charge of R. James Rogers, well-known contractor and builder of Saranac Lake, and will be in readiness for the race horses which will visit the

Purses aggregating $2500 will be put up by the fair association for the horse races during the fair, and there will be eight races during the three days. One of these races will bring together several locally owned horses and it is expected in the free-for-all, Peter Kennedy owned by Philip Adler and Earle Finnegan will meet H. K. B. owned by William Gibney. This race should attract a great deal of interest and attention on account of the rivalry that exists among the local followers of these two owners. In addition to these horses, James A. La tour will bring his horses, Frances McKinney, Georgia-Regina and Schuyler Gratton, to compete. It is expected at least thirty horses will take part in the races. The committee in charge of exhibits at the fair ground is Francis B. Cantwell, Adolph F. Shortt, James A. La tour and Mrs. F. B.Cantwell, and entries for exhibits shown may be made to them or sent to Adolph Shortt, secretary, at the Central garage.

No charge will be made to exhibitors for space but they will be required to furnish tents or booths to show their goods as the association has not yet been able to get sufficient buildings ready to house them. Some tents will be furnished by the fair association and as much space as possible will be provided for exhibitors but cooperation is urged from all exhibitors.

1. This appears not to be the time of day that the race will occur, but rather a qualifying time for entry