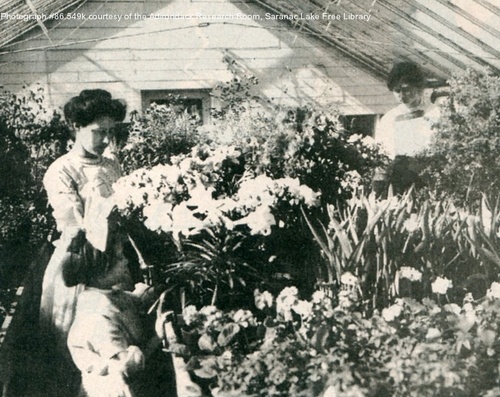 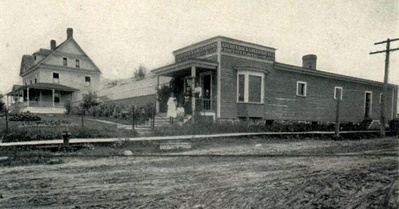 Adirondack Greenhouses; a small part of one of the greenhouses is just visible between the two buildings. This view is looking across Ampersand Avenue near Broadway. (From Saranac Lake in the Adirondacks: The North Woods City of Health and Opportunity, Mid Winter Carnival, 1909. Courtesy of the Adirondack Research Room, Saranac Lake Free Library) According to the Sanborn maps, the Adirondack Greenhouses, also known as Ryan's Greenhouse stood on the corner of Broadway and Ampersand Avenue.  They were founded by Walter N. Klench and William Burdet, and later sold to Peter Edwards.

A childrens' playground and basketball courts are now located on the site, named Boyer-Garwood Park when it was created in 1968. In 2022 it was renamed Ken Garwood POW Park, for the Village trustee in the 1950s, 1960s and 1970s who convinced the Village Board to purchase the property and create the park. 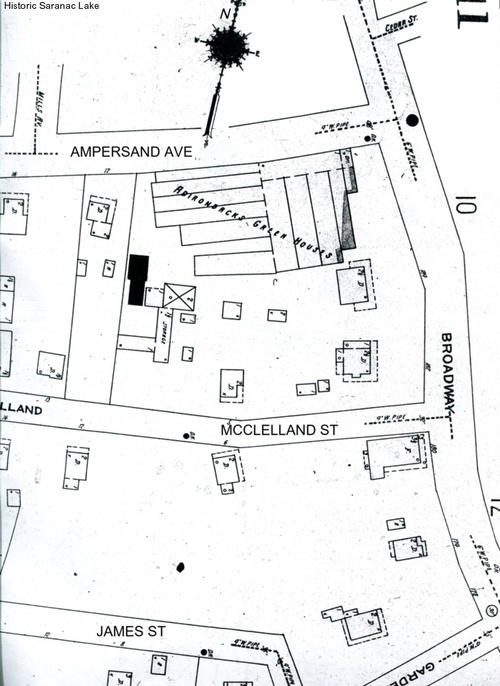 Sept. 7— …New buildings are being planned for this place. Among them a large greenhouse on the corner of Ampersand Avenue and St. Lawrence St.  P. H. Ryan will soon commence its erection.

All Kinds of Easter Flowers and Plants

This letter was run on the front page of the Adirondack Daily Enterprise, May 20, 1954

A LETTER TO THE EDITOR

We, the undersigned residents of Ampersand avenue and vicinity, have become increasingly mindful of the deterioration in the appearance of the once-attractive intersection of Ampersand ave. and Broadway. Specifically, the greenhouse property.

Ambitious proposals are being advanced to make this Village attractive to the visitor. We heartily endorse these sentiments and have waited hopefully for the owners of the greenhouse to evidence an equal civic consciousness.

A Summer has passed. Another is upon us. Hundreds of Summer campers in residence here pass through this intersection and what they are most likely to infer from the appearance of this property is that Saranac Lake has a new junk yard.

We are not accepting the argument that this property is in an evolutionary stage. We are concerned with the present.

What are the owners of this property going to do about its appearance?

Editor's Note: The property discussed is the old Ryan Greenhouse, now owned by Carr and Dyer Motors, Inc., and used by that concern as a storehouse for cars, auto parts, etc.

Vern Carr told The Enterprise today that the greenhouse cannot be torn down or the property, sold until the State makes settlement for a piece of the ground taken for the new Lake Colby road into the Village.

"If the State doesn't settle within a few days," Mr. Carr said, "I will at least see that the windows are whitewashed on the inside to conceal the stored material from public view."

Mr. Carr added that, when the State makes it possible, he will either sell the greenhouse or have it torn down and the ground leveled off.

4/11/14: Pat Vaughn recalls playing as a girl in the 1950s in the old ruins of the greenhouse. She says that it was on the other side of Ampersand, in the lot where Family Dollar now is.  -- Amy Catania

11/7/2017: A 1931 Sanborn map, not pictured here, shows a building labeled "Green Ho."  on the north side of Ampersand Avenue, after the south side was an empty lot. That must be the building that Pat Vaughn remembers.  It may also be the one that is mentioned in the September 11, 1900 news story, above, except that it is on Broadway, not St. Lawrence Street.

1. See the story from the Malone Farmer at White Pine Camp.