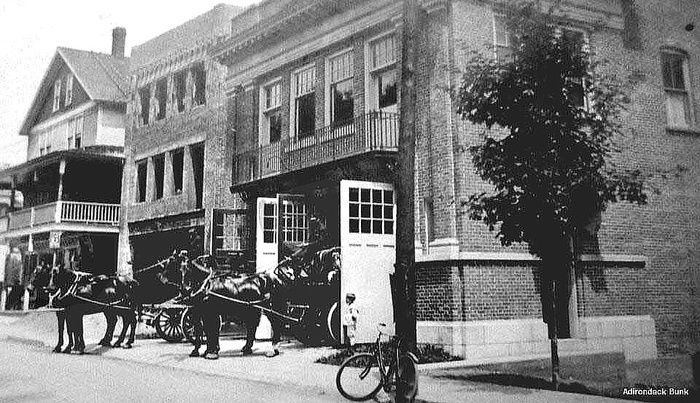 The Adirondack Hotel at far left, Fire House at right and 103 Broadway in between, undated.
Courtesy of Philip Griffin.Address: This address is now part of the addition to the Saranac Lake Fire Department, to the north of the original building.

Work is progressing rapidly on the Murphy Block, 105 Broadway, and two stores are already rented there.

Celebration Is Subdued by Fatal Fire Ushering in Saturday

VILLAGE SORROWS Scene of Burning Viewed by Hundreds during the Day

This year's Fourth of July was the saddest in the history of Saranac Lake. When the news of the fire tragedy began to travel about the village shortly after dawn, many at first did not believe it, but thought it merely wild story. In view of the splendid record here of not one life lost in a fire in the history of the village, it is small wonder many were skeptical.

Scores hurried to the scene from all sections of the village and as the news was carried to vicinity communities others started by motor for Saranac Lake. From shortly after dawn until late last night local residents and visitors from all sections of the Adirondacks surrounded the ill fated building. Local police stationed at the ruins throughout the day kept the motor traffic in order and crowds back.

The interest of the crowd centered on the windows from which some of those trapped were forced. The window high in the rear over the sill of which the body of one of the victims hung until rescued by firemen appeared to be of the greatest interest. The front and rear porches which were the means of saving several lives were also noted. People living in the vicinity answered questions from dawn to dark and pointed out the places of most interest in the ruins.

Early in the afternoon District Attorney Harold W. Main, accompanied by Chief of Police Frank Sheldon and Fire Chief E. W. Harrison went over the burned structure from top to bottom, in a preliminary investigation. The trial attorney made a thorough examination of every room or what was left of them, Chief Sheldon and Chief Harrison pointing out where the bodies were found and many other details. District Attorney was accompanied by Sheriff George Donohue. Following the inspection of the building the officials returned to the town hall and arrangements were perfected for the inquest and investigation this afternoon.

As the result of the fire tragedy the celebration of the Fourth of July hereabouts was much subdued. Police and fire headquarters and the offices of the Adirondack Enterprise were deluged with telephone calls throughout the day. Many of the calls were from out of town. Relief work in connection with the fire was underway at an early hour Saturday morning.

A most unfortunate phase of the disastrous fire of Saturday morning is the many wild stories current regarding the firemen.

Some of the stories are so silly as to deceive no one. Others to the effect the firemen were slow and ineffective are proved false on their face by the fact the flames, which were of great volume, were darkened in record time. The delay was in getting the alarm rung.

It appears from careful investigation that after the alarm had been given at the fire station by people pounding on the doors, the apparatus was brought into action at the earliest possible instant. With a three story house a roaring furnace but a few feet distant, and the fact it was known people had been trapped and killed in the fire, formed a combination that probably made it appear to some the firemen were slow.

As a matter of fact the flames had taken their toll even before the alarm was given. There was one man over the sill of a third story window. There is little question but that be was dead before the firemen reached the scene. But they were not certain he was dead and several risked their lives in getting the body from the window to the ground.

But a short time later the firemen again risked their lives when back of their hose lines they battled their way into the inferno of smoke and smoldering flames, groped about on the quaking floors to recover the bodies of the dead, and in the hope that perhaps they might be able to find someone in whom life yet lingered.

There is not a better volunteer fire department in the state than that of Saranac Lake. Until Saturday morning there had never been a life lost here as the result of fire. With the single exception of the fire last winter in the business district, there has not been a fire here in years that was not darkened in record time. Even that fire, under the most unfavorable conditions, was practically held to the building where it started. No one who witnessed it will ever forget the skilful and effective work of the firemen in saving the Berkeley when it appeared the famous old hotel was doomed.

It appears the firemen did all they possibly could do under the conditions faced Saturday morning. Three of the victims of the fire were found dead in their beds which shows the terrific speed with which the fire mushroomed into the two upper floors. Even before the alarm bell brought the fire men from their beds and hurrying to the scene from all parts of the village, the building was in flames from cellar to roof.

It is certain that a little calm reflection will convince the critics that everything human beings could do was done and done as quickly as possible, by the men who, without pay, have for years been risking their lives, in the service of the people of this village.

In spite of the flurry of criticism at this time, the men of the Saranac Lake fire department will carry on and continue to give of their best, firm in the knowledge they have the confidence, gratitude and admiration of the people of this community.

[First line illegible] story apartment house owned by J. J. Murphy, at 105 Broadway, formerly the Adirondack hotel, on Saturday morning, last. Saranac Lake Sunday made arrangements to bury its dead and give relief to its victims.

The old building, formerly known as the Adirondack Hotel, was built entirely of wood, with two stores on the ground floor. A veritable fire trap, the structure was without the protection of fire escapes, a single narrow wooden stairway at one side offering the only exit.

The alarm was sounded shortly before one a. m. Screams of the trapped occupants attracted attention to the blazing building, bringing the apparatus from the local station two doors away.

By this time the entire interior was aflame, making it impossible for the firemen to enter.

Mrs. Dukett, who is in the General Hospital in a critical condition, jumped from the third story. Mrs. Chas. Monakey, who leaped from the burning building is in a serious condition.

An investigation is being made by Dist. Atty. H. W. Main, as to the criminal neglect involved in such a fire trap.

One outstanding and ever significant fact is the always fatal hours, of 3 to 5 a. m.—all over the U. S in fires.

A temporary injunction issued by County Judge Frederick G. Paddock was served on John J. Murphy ordering discontinuance of the repair and reconstruction or the three-story frame building at 105 Broadway, which was damaged by the fire of July 4th last in which seven persons lost their lives. The injunction also sets Monday September 2, as the day for a hearing at which Mr. Murphy is called upon to show cause why the injunction should not be made permanent.

This action is based on the amended village ordinance relating to fire limits, as adopted on March 6, 1923, and on the refusal of the village board to issue a building permit. Plans were submitted by Mr. Murphy, and the permit was refused on the ground that the proposed construction did not comply with the following provision of the ordinance: "No persons shall construct, rebuild, remodel or add to any wooden building within the limits here-in-after described unless, when so constructed, rebuilt, remodeled, or added to, the entire exterior walls, roof surfaces and cornices of such building be of fire proof materials or materials not liable to take fire." Notified Owner

In refusing this permit, the

enclosing a copy of the ordinance.

much of the interior damage has been replaced, and work has been started on the exterior. Members of the village board state that they have received many expressions on the part of citizens objecting to the reconstruction of this building, with which was associated the worst and only fire tragedy of its kind in the history of the village.

The trustees are reliably informed, they declare, that, the damage to the building far exceeded fifty per cent, and they indicate that they intend to insist upon full compliance with the law.

Mr. Murphy is understood to be equally firm in his purpose to rebuild the block with frame construction, taking the stand that other building reconstruction has been permitted in instances where the fire damage was no less than that to his building.

To judge from comment about the village; public opinion supports the stand taken by the board of trustees and their action to cut down so far as possible the number of frame buildings in the business section.

A coroner's inquest on the circumstances surrounding the fire is still pending, having been postponed to await the recovery of Mrs. George Dukett, who was badly burned before she jumped to safety from the building and whose testimony is considered of importance. Mrs. Dukett was discharged several days ago from the Saranac Lake General hospital, where she Was under medical care for six weeks following the fire, and is now understood to be sufficiently recovered to give testimony.