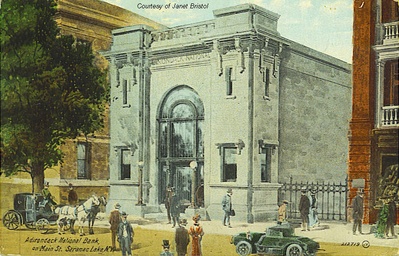 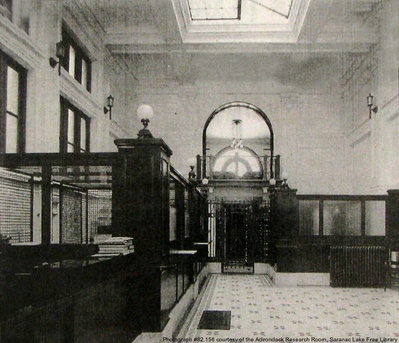 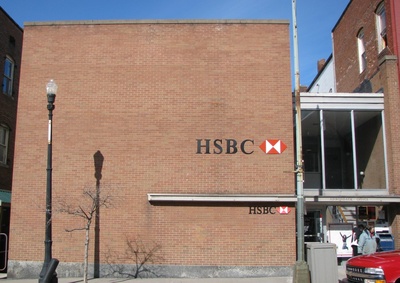 Other information: George LaPan was its president from 1944 until his death in 1957.

Because of the total modernization of its facade, the bank is a non-contributing building within the Berkeley Square Historic District.

This bank was one of those HSBC branches sold to First Niagara Bank in 2011 1 and then Key Bank in October 2016.

On the northern portion of the Reuben Reynolds lot, the Adirondack National Bank, which had been operating out of a storefront in the Coulter Block, built its own building in late 1906 and early 1907.

The Adirondack National Bank had been the gem of Main Street. Marine Midland covered the most beautiful commercial facade in the Adirondacks from top to bottom and edge to edge with an absolutely flat, featureless wall of brick — featureless except for an internally lit sign thrusting the Marine Midland name and logo five feet out over the sidewalk. 2

There is some possibility that the facade was not ruined and that, with a removal of the wall, it could be restored at a reasonable cost. But the original interior was totally, utterly destroyed and replaced by a relentlessly banal example of early 1960s modernity.)

The Marine Midland wall, since acquired by HSBC, stands today, a hole in the smile of Main Street, a reminder of what can happen when a community forgets to guard its treasures, and a sad monument to the far reaching and unreachable powers of the faceless corporations that have attained such dominance in late 20th century American life.

Some locals hope buyer will look for hidden old facade

Key Bank plans to close its branch here this fall, citing a shortage of customers as the reason. On Nov. 9, a Friday, the bank will close the branch at 75 Main St. as well as its drive-through outpost at 151 Church St. . . .