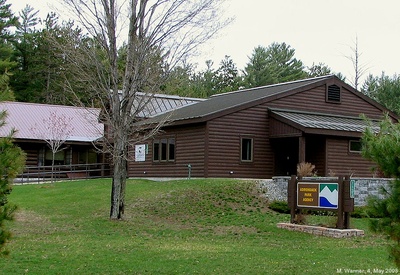 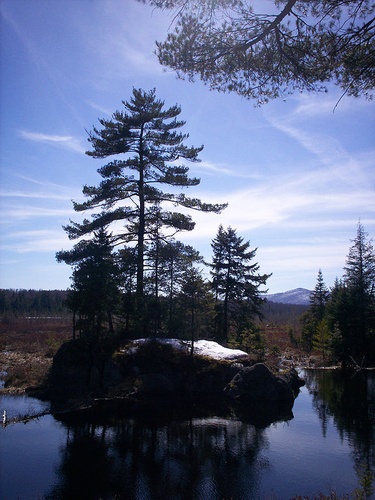 The Paul Smiths Adirondack Park Visitor Interpretive Center, Heron Marsh from the Barnum Brook Trail The Adirondack Park Agency (APA) was created in 1971 by New York Governor Nelson Rockefeller as a governmental agency that performs long-range planning for the future of the Adirondack Park. It oversees development plans of private land-owners as well as activities within the Adirondack Forest Preserve. Development by private owners must be reviewed to determine if their plan is compatible with the park. The agency is headquartered in Ray Brook, New York.

From its inception in 1892, the six million acre (24,000 km²) Adirondack Park, which is larger than Yellowstone, Yosemite, Grand Canyon, Great Smoky, and Everglades National Parks combined, has been a battleground between those who would preserve wilderness and those already living within the parks boundaries. The Adirondack Park Agency was created in an attempt to settle many of these longstanding issues. It has been controversial from the outset.

The Adirondack Park is unique in that more than half of the land in the park is privately held. The APA was formed in response to a perceived threat to the integrity of the privately held portion, which, at the time, was in the hands of only a few hundred owners. The completion of the Adirondack Northway in 1967 drastically increased the pressure brought by developers for second home developments. The agency's first task was to create a master plan, followed by a zoning map and land use plan.

The land use plan, in particular, ignited a storm of controversy. The idea of non-residents from Albany and New York City dictating to residents of the park what they could and could not do with their own land caused a great deal of resentment among the traditionally independent-minded "Adirondackers". Anonymous phone calls threatened to burn the homes of APA members, truckloads of manure were dumped on agency land, a man was caught in the act of attempting to burn the new agency headquarters; one town even voted to secede from the park. While most park residents were opponents of the APA, some, notably Clarence Petty, supported it; Petty served on the commission that led to the creation of the APA, and his work was the basis of much of the land classification.

Initially, the APA handled matters poorly, and sentiment ran strongly against it. Then, in 1972, the Horizon Corporation of Tucson, Arizona purchased 24,000 acres (97 km2) within the park and announced plans to build 10,000 new homes, along with golf courses, and ski areas. Other plans for 4,000 homes on 18,000 acres (73 km2) were under development. Suddenly the Park Agency's Land Use Plan looked much more reasonable to many more people, and the continued existence of the Agency assured.

The work of the APA remains controversial, however, with many of its actions drawing lawsuits from one side or the other. Recent issues have revolved around cell phone towers along the Northway and on Lake George, all-terrain vehicle and snowmobile access to park lands, floating camps and/or houseboats, and, as always, subdivisions. A number of organizations continue to monitor its actions, including the Adirondack Council, the Association for the Protection of the Adirondacks, the Residents' Committee to Protect the Adirondacks and the Adirondack Land Trust. 1

Cuomo would give APA extra $1 M

After the appointment of the APA's first seven members by then-Gov. Nelson Rockefeller in 1971, the agency "had no real funds to work with," then-APA Chairman Richard Lawrence told the Enterprise at the time.

A bill establishing the DEC was passed by the state Legislature with bipartisan support on Saturday, April 18, 1970. Rockefeller signed that bill into law a few days later, on the first-ever Earth Day, April 22. When it was formed, it also absorbed the Water Resources Commission and the Air Pollution Control Board, according to an Associated Press article at the time. The DEC is celebrating its 50th anniversary this year.#

1. This article appeared originally on Wikipedia as Adirondack Park Agency; its edit history there reflects its authorship. It is licensed under the GDFL.