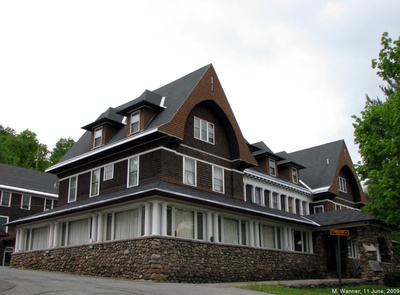 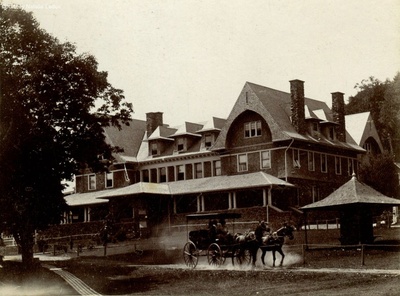 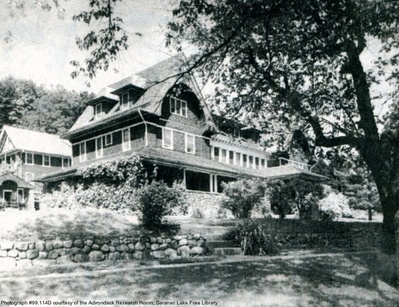 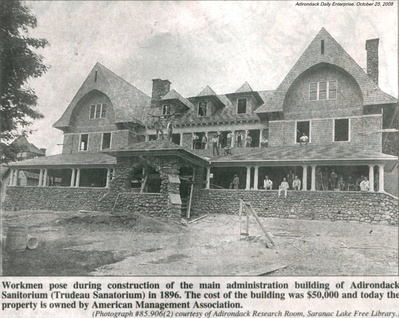 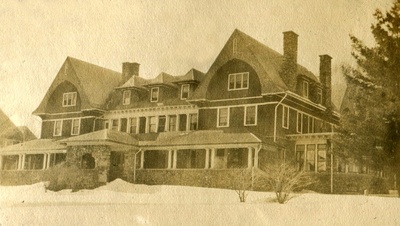 The first Main Building, which was replaced by the present larger one, was likely situated facing the route of the historic Old Military Road, which passed through Preacher Smith's farm which later became the sanatorium property. 1 The specific route is unknown, though the old road is likely to have entered the sanatorium property near the South Gate and exited at the North Gate. This, larger, replacement Main Building may be located over the old roadway. 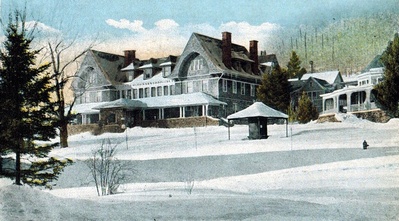 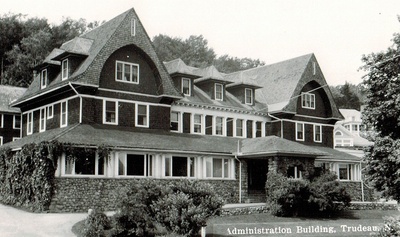 Administration Building, probably c. 1945. Courtesy of Noreen OslanderThe Administration Building, at 24,136 square feet, is the largest of the sanatorium buildings. It was designed by J. Lawrence Aspinwall for Renwick, Aspinwall and Owen, architects, of New York, with W. L. Coulter supervising the construction. Branch and Callanan were the builders. Its impressive two and one-half story Elizabethan Revival shingled facade, with cobblestone first floor and two distinctive hooded dormers, became a well-known symbol of the institution, second only to Little Red.

"The first years of anxiety and financial difficulty were gradually being replaced by encouragement that the institution would survive. New buildings were given, beginning with a new Administration Building in 1896, made possible by a bequest of $50,000 from Miss Julia Cooper and gifts from others." 2 A former patient described bathing facilities: "The administration building contained a series of bathrooms and all patients desiring a tub bath carried the necessary paraphernalia from their cottage to the administration building." 3 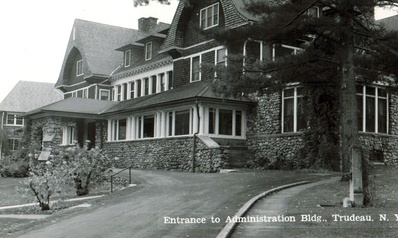 Courtesy of Noreen OslanderMany small incremental changes to the Main Building occurred while the sanatorium was in operation. In 1899-1900 a "Help's Dining Room" was added. 4 In 1905 came a small diet kitchen. 5 In 1906 Mrs. William H. Bliss gave an addition of a large bay on the north side, to enlarge the dining room capacity. 6 In 1910, Mrs. Armstrong noted, "The sleeping-out craze reached the Administration Building," and a sleeping porch, dubbed by patients "the Hurricane Deck," was added to Third Floor West. 7 The Hurricane Deck was later removed. The open veranda of the Main Building was glass-enclosed for use as expanded dining room and parlor space in 1927.