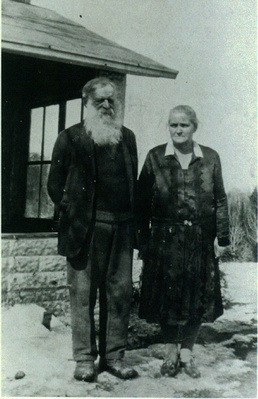 Mattawa Dec. 25 — Christmas morning at eight o'clock the death of Mrs. Herbert Hazelwood occured at her residence in Papineau Township near here. The deceased woman had been in poor health for several years and at different periods during that time had been a patient in Toronto General Hospital. The late Mrs. Hazelwood was a woman of middle-aged, an Anglican in religion, a devoted wife and mother and a friend to the whole community. When the Women's Institute of Mattawa was organized, she was it's first president and remained in that position for many years. She was widely known in Mattawa and vicinity having resided here during most of her married life. Besides her husband a family of grown children survive, two sons still residing at home. The funeral will be held on Sunday at one p.m.

At Saranac Lake, Sept. 11, 1892, by Rev. M.A. Woodruff . HERBERT HAZELWOOD of England, and Miss AGNES R. McCLELLAND, of Saranac Lake. Mr. and Mrs. Hazelwood boarded the afternoon train for Montreal, where they will for the present reside.