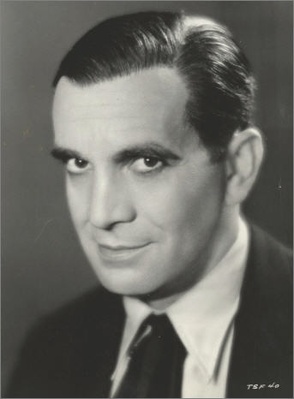 Al Jolson (born Asa Yoelson) was an American singer, comedian, and actor, whose career lasted from 1911 until his death in 1950. He was commonly called the world's greatest entertainer, and is considered to be the first openly Jewish man to become a star in America. Bing Crosby, Judy Garland, and Jerry Lee Lewis all counted Jolson as an influence, and Bob Dylan once referred to him as "somebody whose life I can feel". 1

Along with other major stars, he was brought to Saranac Lake by William Morris in the 1920s in support of the Saranac Lake Day Nursery and other causes. 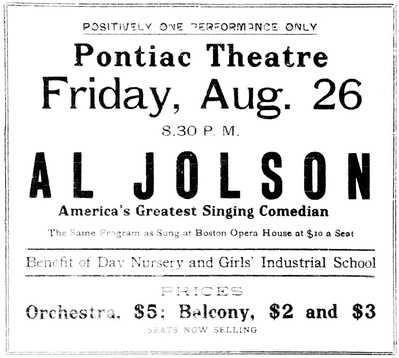 ...And vaudevillian Al Jolson— so afraid of TB he told Morris he wouldn't come within 100 miles of this place, and then came here every year for nearly a decade. One night in 1927, before a packed house in the 1,200-seat Pontiac Theater on Broadway (just north of where Berkeley Green is today), he performed solo for three solid hours. Aside from Broadway, you might also see him on Church Street — not necessarily socializing with the president, though he was a supporter, having popularized the campaign tune "Keep Cool with Coolidge" - but going to visit patients at the Northwoods Sanatorium which was where the Paul Smith's dormitory now stands. There he funded a free bed for needy members of the theatrical profession...

Al Jolson, famous comedian of the New York stage, last week sent a check for $500 to Dr. Edgar Mayer, secretary of the Adirondack Fund for Tuberculosis at Saranac Lake, as the first installment on $1000 a year promised by Jolson to maintain a free bed for deserving members of the theatrical profession seeking to rejuvenate their health at the Northwoods sanatorium in Saranac Lake.

Approximately 90 per cent of Al Jolson's estimated $4,000,000 estate eventually will go to charitable, educational and religious organizations, it was indicated from his will filed for probate.

Jolson also left $59,360 to the Northwood sanitarium at Saranac Lake.

…I have memories of lots of old happenings. I have lived here since 1918.

The one I like best is the concert put on at the Pontiac Theater about 1922 where Al Jolson sang the song, "April Showers." It was written for him at Paul Smith's Hotel where he and many theatrical people were staying. It was sung for the first time anywhere. The concert was for the benefit of the Day Nursery on Bloomingdale Avenue where the Head Start is now.

Saranac Lake has changed a great deal since those days, but it is the best place I know of to live.