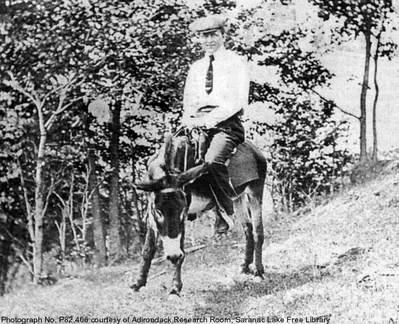 Albert Henry Allen was a doctor who came to the Adirondack Cottage Sanitarium in 1903 as a patient, where he was soon "busily assisting in the work." 1 In 1904, probably while still a patient himself, Dr. Allen worked in the Free Outpatient Department of the sanitarium. 2 He contributed an article on Dr. Hermann Brehmer to the Journal of the Outdoor Life. 3

"Dr. A. H. Allen, one of the assistants at the Sanitarium, is spending the winter in Saranac Lake village at work in the Saranac Laboratory. Until his return, his place will be taken by Dr. E. T. S. Lupton." 4 After leaving the sanitarium, he came to the village and shared the office of Dr. Edward R. Baldwin and worked part time at the Saranac Laboratory. At least one published paper resulting from research at the laboratory named Dr. Allen as co-author. 5

"The year 1907 — Dr. A. H. Allen has opened his burro livery for the season. The headquarters are at the Fowler Livery." According to a July 16, 1906 story in the Troy Times, one popular use for the burros was to carry guests to the top of local mountains such as Mt. Pisgah.

In An Autobiography, Dr. E. L. Trudeau remembered an occasion "on my sixtieth birthday (October 5, 1908) . . . after a very pleasant dinner they gave me. At the end of the dinner my good friend, Dr. J. Woods Price, in the guise of Father Time, with a long, white beard, and a bottle of chloroform, appeared suddenly to claim me as having passed the age limit of usefulness. Dr. James rose to protest, but Father Time said he would not listen to him, as he was too near the age limit himself and would be prejudiced; but if one of the younger men would speak he would listen. An impassioned and most clever plea to spare me followed, spoken by the late Dr. Albert H. Allen. Father Time relented, and gave me a big parchment diploma with a huge seal attached, permitting me to continue to live as long as I could; and I have been doing my best to avail myself of his gracious permission." 6

Dr. Allen was the second vice-president of the Board of Trade (predecessor of the Chamber of Commerce) in 1909. 7 He built the house at 22 Catherine Street in about 1909 from a design by Scopes & Feustmann. ###