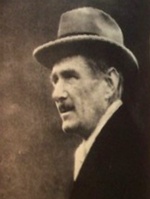 Alexander Smith Cochran was a member of the Class of 1896 at Yale, a classmate of E. L. Trudeau, Jr. there. A man of great inherited wealth, he was the founder of the Elizabethan Club at Yale, donating books and a large endowment to establish it. He died of T.B. in Saranac Lake on June 20, 1929, at age 55; he had been examined by Ned Trudeau's father on June 18. His local address was 147 Park Avenue, one of the largest and finest private homes in the village. The class record of his death states, "Few of his classmates knew him intimately; the people of Yonkers, his former home, held him in the highest respect; and in the words of the newspaper obituaries, 'his employees adored him.'" His collection of early American portraits is displayed at the Philipse Manor Hall State Historic Site, Westchester County's oldest standing building, in Yonkers.

Alexander S. Cochran's Yacht Leads All the Way, but Handicap Beats Her.

NEWPORT, July 8. — After leading from start to finish over a thirty-mile windward and leeward course Alexander Smith Cochran's bronze-hulled Vanitie had to be content with second honors today in the opening of the series of trials that count toward the selection of an America's Cup defender. [pdf of full article here]

SARANAC LAKE, N.Y., June 20.--Alexander Smith Cochran, carpet manufacturer, philanthropist and yachtsman of New York and Yonkers, died here last night of pulmonary tuberculosis, from which he had been suffering for fifteen years. He was in his fifty-sixth year. [full text here]