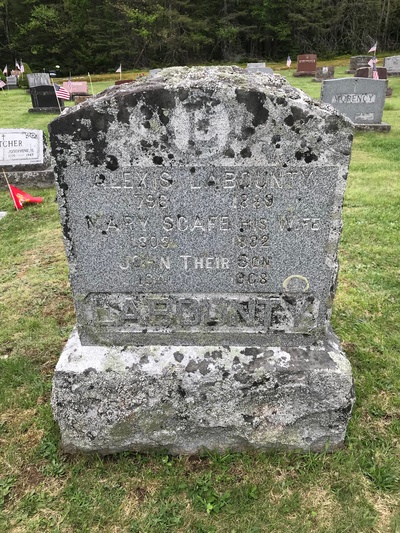 Married: Mary Scafe born in England in 1805, married September 15, 1823 at the Episcopal Congregational of St. Johns by William Devereux Baldwyn. The register states the farmer Alexis's last name as Boudreau and states them both residents of near the Isle-aux-Noix. Witnesses were Thomas Scafe and William [?].

In 1834 Alexis Boudriau dit Labonte (Alexis or Alexander Labounty) leased a mill (located on Beaver Creek in Delery) for ten years from Robert Hoyle. —-The Christie Seigneuries: Estate Management and Settlement in the Upper Richelieu Vally, 1760-1854 By Françoise Noël

Alexis was a rebel in the Canadian Patriot War of 1837 and 1838. He was in prison because of his actions. Information from three depositions and one Petition in the Bibliotheque et Archives nationales Quebec.

Alexis Labounty arrived in the area before 1860.

In 1870/71 Alexis was an assessor for Harrietstown.

In September 1870, A. Labounty was one of three delegates from Harrietstown to the Republican County Convention.