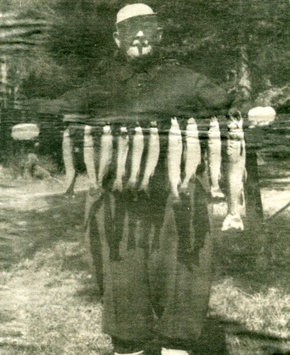 Alexis W. Stanley, also called Alex or Alix, was the owner (and possibly the founder) of the prestigious Stanley Tool Co. of New Britain, Conn. He owned a cottage in Rockledge and also purchased the Waggaman Camp on Upper Saranac Lake.

The Rockledge Company sold a three-acre lot in 1910 to Alexis W. Stanley, who was the second person to build a home in the subdivision, according to Evelyn Outcalt in "History of 'Cluett House' Which Survived 60 Years," Adirondack Daily Enterprise, March 17, 1970. (See Rockledge Company for the complete article.)

Alix W. Stanley purchased the Waggaman Camp at the southern end of Upper Saranac Lake, and chose to keep the existing caretakers, Fred and Mildred Derby.

A cordial relationship was established which grew into a kinship among the three, lasting until Mr. Stanley's death in 1954. Fred served as guide, fellow fisherman and sailboat crew, as well as caretaker, while Mildred filled the post of chauffeur in the Oldsmobiles and Buicks which Stanley favored. She would drive him to his home in New Britain or to his apartment in New York City with complete confidence. Mrs. Derby tells how Stanley had a favorite flannel bathrobe which he constantly wore around the house. During a stay at his Connecticut home he was wearing the somewhat shabby garment and suddenly decided he wanted Mildred to drive him into town. His housekeeper was horrified but he ignored her protests and said to Mrs. Derby, "I gave $10,000 to the hospital, $10,000 to the Boy Scouts, and $10,000 to the church and I want to see how they are spending the money." She drove him in the Oldsmobile but he did not have to leave the automobile in his inspection tour so the bathrobe went unobserved.

Stanley greatly enjoyed visiting the area lumber camps and took special pleasure in dining in the camp kitchens where the common foods were to his liking. He never carried any money on his person and each time upon leaving the camp he would say to Fred, "Give the cook a couple dollars and see if he will let us have a loaf of that bread.

He had simple tastes in other matters as well. Back when I was with the Paul Smith Electric Co. we had to replace the submarine cable which fed the Stanley Camp from across the lake at Panther Point. I was sent to arrange the necessary power outage with Mr. Stanley and met Fred at the boathouse. He took me to meet Stanley who was seated on the stone wall cleaning a mess of perch! Later I told Red that I was amazed to see a millionaire cleaning perch, but he assured me that his boss was very down to earth and that one of his favorite meals was fried perch. He not only enjoyed eating them but also thought catching them was great sport. Fishing took second place to sailing, however, which was his first love and he spent many happy hours out on the lake in his sailboat.

Fred had a pair of dogs that were his constant companions and rode in the back seat of his car. One day, Stanley said, "Fred you need a better vehicle for those dogs, come with me." They drove into Saranac Lake where Stanley presented Fred with a brand new Jeep.

More than $1,000,000 has now been pledged to the building fund of the General Hospital of Saranac Lake, according to Dr. Anthony B. Gedroiz, Chairman of the Campaign Advisory Committee.

In announcing this figure yesterday, Dr. Gedroiz stated that a pledge of $30,000 for X-ray equipment for the new hospital has been received from the A. W Stanley Charitable Foundation of New Britain, Connecticut.

Mr. Alix W. Stanley, a frequent visitor to Saranac Lake in former years, provided funds for the X-ray equipment which enabled the present General Hospital to open a modern Xray department in 1950. This department continues to provide diagnostic and therapeutic X-ray facilities for the entire North Country with two-thirds of its patients coming from outside Saranac Lake. More than 86,500 examinations and treatment have been given in this department since its opening fifteenyears ago.

The $1,000.000 in pledges with the $600,000 so far allocated to the project in Hill-Harris funds total $1,600,000 of the $2,300,000 estimated cost of the new hospital. These figures do not include the cost of the third floor shell for which Mr. Edmond A. Guggenheim has promised funds when construction plans receive necessary state approval.