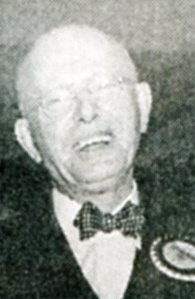 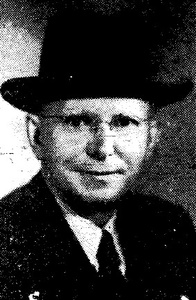 Alfred W. Currier was cured of tuberculosis here, and founded the Currier Press in 1913 at what became known as the Currier Block.

"Looking around and seeing all my old friends here tonight is all the proof I need that life has been good to me," Alfred W. Currier, charter member of the Lodge of Elks and Lodge Trustee for more than 25 years, told a capacity testimonial dinner last night.

It was a great turnout of leading citizens from Saranac Lake, Topper Lake and Lake Placid that paid tribute to the man who was expected to die of TB in 1912 when he came to Saranac Lake but who has instead led a vigorous and successful life as a printer and later as the president of the Saranac Lake Savings and Loan Association, a position he presently holds.

Tribute was also paid at the dinner to two young leaders of the community, Kenneth Hoyt and Gail Rogers, winners of the Tri-Village Youth Leadership Essay Contest sponsored by the Elks Youth Activities Committee. They were each awarded U.S. Government war bonds by Mr. Currier.

In making the awards to Gail and Ken, Mr. Currier said:

"Among the things Elks value besides good fellowship is the promotion of good citizenship and the encouragement of young people to become good citizens. Both of you have shown what it takes to be good citizens, therefore it fives me great pleasure to present these gifts, stock certificates in a corporation known as the United States."

Mr. LaPan, president of the Adirondack National Bank, in leading off with the tributes to Mr. Currier, said he had been associated with him on "a number of committees working on a number of problems."

"Any of us who have worked with him recognize his ability and good business judgement," Mr. La-Pan added.

Mr. Lockwood, who served on the Elks Board of Trustees for many years with Mr. Currier, said that' the honored guest had "always been faithful to the principles of brotherly love"

Attorney Hewitt told several numerous stories about his associations with Mr. Currier, and then added that "Mr. Currier is a wonderful citizen who has served sixteen years as treasurer of the Rehabilitation Guild, been a Village Trustee, active in the Boy Scouts And the Red Cross and president of Deerwood Summer School."

Mr. Shea declared that "our objective as Elks is to help prepare the youth of America to be useful members of a free society." He reviewed many of the programs supported by the Elks, including the Soap Box Derby, baseball and basketball leagues, the Youth Center in Lake Placid and the forthcoming: National Youth Day on May 1 when there will be a dance for high school seniors from Saranac Lake, Lake Placid and Tupper lake.

Mr. Shea then presented Mr. Currier with a handsome clock "for long and valued service."

"All I have, all I have ever accomplished," Mr. Currier responded, "has been due to friendship."

He said that when he arrived in a cold pre-dawn morning in January in 1912 he was met at the Saranac Lake station by Mike Egan.

"My friends in Philadelphia, where I had been working for the Curtis Publishing Company, thought I was coming here to die," he said. "I have outlived most of them.

"Mike, who became my good friend, took me to the Riverside Inn and installed me in a room where I looked across Main street at a sign which said 'Good Printing'. I had no idea that later I would go into business there.

"Dr. Baldwin told me to come see him right quick, but it took him six weeks to get me into Trudeau."

Mr. Currier said after a while he felt string enough to go back to Philadelphia but had a second break-down, went to Texas, and then returned to Saranac Lake.

"When my funds ran out, I told Dr. Hugh Kinghorn that I must have a job. He said, alright, but I must work only half a day. Beanie Barnet suggested I try Palmer-Simpson on Olive street; they were making flying boat hulls during World War I. I got a job there as office manager.

"Six months later I saw Dr. Kinghorn, again and he said how wise I was to work for only half a day. Then I told him I'd been working full time for six months. 'Continue as you are,' he said.

"One day a lean, lanky fellow came in to collect an account. I told him we couldn't pay then, but would later. From that time we got along very well. He was Ferris Hewitt."

Mr. Currier told how he had to, borrow $800 from the bank for the company's payroll and once, in desperation, went to Flatbush to collect part of a damage claim so the company could keep going.

Finally he bought Connor's Print Shop. His first offer was turned down, but Charles Thurston urged him to make a second and later he bought the building from Walter Murray.

Mr. Currier was obviously deeply moved as he concluded with a tribute to his friends and the more than 100 guests stood and gave him warm applause.

"The dinner committee in charge of last night's affair was chaired by Jim Finn and Jim Kelly.

A resident of the area for 65 years, he had been the president of the Adirondack National Bank before his retirement and a director of the Saranac Lake Savings and Loan Association since 1933.

Mr. Currier also founded Currier Press in 1913 after he was cured of tuberculosis here.

He was born in Yarmouth, Nova Scotia, the son of Nathanial and Selina (Raymond) Currier.

With a group of local investors, Mr. Currier helped in the founding of the local savings and loan after he left the printing business only a few years after he began it.

He resigned as chairman of the board of the savings and loan to become president of the Adirondack National Bank in 1958.

Mr. Currier, with his wife Gertrude, maintained a farm in Franklin Falls for 23 years.

The farmland was donated to Paul Smith's College after his retirement and he moved to 12 Main Street. His wife died in 1971.

Mr. Currier was the author of a philosophical novella entitled, "The Great Tree," which is the story of the Adirondack White Pine.

Among his activities in the area, he was a village trustee, a charter member and trustee for 25 years of the Benevolent and Protective Order of the Elks Lodge in Saranac Lake, a treasurer of the Rehabilitation Guild, a leader in the Boy Scouts and Red Cross, president of Deerwood Summer School, and a Rotarian.

Survivors include a sister, Mrs. Alice Higgins, of Florida.

Friends may call at Fortune Funeral Home from 2 to 4 and 7 to 9 p.m Thursday.

A funeral service will be conducted at 11 a.m. Friday, at the funeral home, with the Rev. Philip Snyder, rector of St. Luke's Episcopal Church, officiating.

Interment will be in Goodspeed Cemetery in Franklin Falls in May.