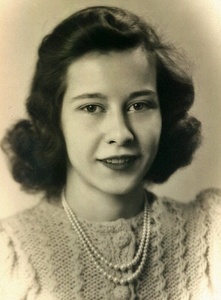 A daughter of Clara Eloise Wilcox and John Ridenour, Alice Everest Ridenour Wareham wrote for the Adirondack Daily Enterprise, and was a long-time, stalwart volunteer for the Village Improvement Society. In her many press releases for the VIS, Alice never failed to recall the Olmsted Plan for Saranac Lake, a document created by Edward Clark Whiting in about 1909 that has been the blueprint for the VIS's work ever since.

She attended the Baldwin School, and graduated from Saranac Lake High School in 1939 and Smith College in 1944.  Since she was 17 she had worked summers in the newsroom of the Adirondack Daily Enterprise. After graduating from Smith she returned to Saranac Lake.  With the World War II labor shortages, she was placed in the composing room and ultimately became a journeyman Linotypist. Eventually  she was moved to the circulation, front office, classified advertising and display advertising departments until she had a sound working knowledge of each. When Mr. Ridenour sold the Enterprise in 1949, she had become co-publisher.

She was a lifelong communicant of St. Luke’s Church, and a member of St. Luke’s Ladies’ Guild. She served as secretary of the Saranac Lake Free Library board, was an active member of the Village Improvement Society, served on the Saranac Lake Voluntary Health Association board and had been on the organizational board of the Lake Placid Sinfonietta, serving six years and continuing on its Advisory Board.

Alice Wareham's funeral was held on June 19, 2018. Those wishing to remember her are asked to donate to the Village Improvement Society, Voluntary Health Association, Saranac Lake Free Library, Tri-Lakes Humane Society or Memorial Endowment Fund of the Church of St. Luke, the Beloved Physician. Her obituary appeared in the Adirondack Daily Enterprise on June 15, 2018.

"The true spirit of Christmas" by Howard Riley

. . . This feature story [see Arthur Pratt] was written by one of my mentors when I started work at the Enterprise . . . Alice Ridenour Wareham whose parents, Mr. and Mrs. John Ridenour, owned the Enterprise forever.

Alice could cover any job at the newspaper from reporting, editing, proofreading or circulation; she could them switch gears and go to the composing room running the linotype machine or pulling proofs on the proof press. She taught me to operate the linotype machine, a complicated contraption used in the hot type era.

It would take pages to describe how the linotype worked, but for now suffice it to say that it had 99 keys and the typesetter typed up and down not horizontal; my sort of long hair drove Alice nuts and she threatened many times to walk over and cut it off, hanging over my forehead as I typed.

The Front Page
". . . Alice Ridenour Wareham paints the most graphic image of the Enterprise year when she was being groomed as co-publisher with her father.

"Everyone in town said she could run any machine or any job on the paper, and I think she proved it more than once. If she was queen of the hot metal days, her name should be etched in the logo among those who gave the Enterprise a unique authority across the Adirondacks in rare and racy times.
"I think that in the tradition of John Ridenour, 'the readers still damn the newspaper upside down, but they still keep reading it!' . . ."

Mr. and Mrs. John S. Ridenour, of 112 Park avenue, announce the engagement of their daughter, Alice Everest, to Arthur W. Wareham, son of Mrs. Walter Wareham, of Brooklyn, and the late Mr. Wareham. Miss Ridenour attended the Baldwin School, was graduated from the Saranac Lake High School, the Choate School and from Smith College in 1944. She was formerly news editor of the Adirondack Daily Enterprise. Mr. Wareham was graduated from Pratt Institute in 1938 with a degree of Bachelor of Architecture and for two years was in the office of John Russell Pope in New York City. During World War II he was with Caribbean Architect-Engineer in New York and Trinidad, B. W. I., and was architectural engineer with Co-ordinator of Inter-American Affairs in Paraguay. Following this he was hospital architect for the U. S. Public Health Service in Washington, D. C. He is an associate member of the firm of William G. Distin, architect.

External links:
In 2010 the Adirondack Daily Enterprise ran a series of articles by Alice Wareham about the history of the parks in Saranac Lake: