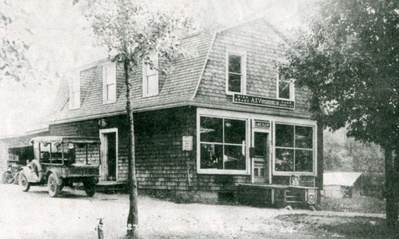 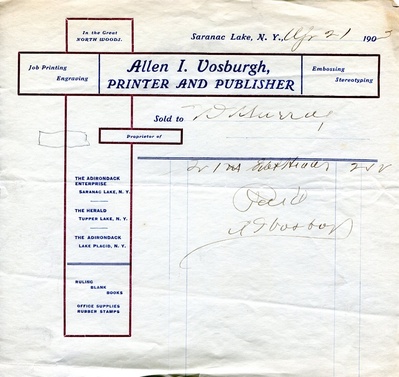 A statement from Allen I. Vosburgh, Printer and Publisher to Wallace Murray, 1902 Born: July 19, 1870, son of Isaiah Vosburgh and Alice M. Minner or Miner

Allen Isaiah Vosburgh was a stage driver who later ran a general store in Lake Clear. He served as the supervisor of Harrietstown from 1923 to 1929. He was the son of Saranac Lake Village President, Isaiah Vosburgh. He published the Adirondack Enterprise from 1898 through 1906.

A. I. Vosburgh, who recently sold the Adirondack Enterprise at Saranac Lake, still owns the Tupper Lake Herald, and has installed there a large cylinder press for printing the latter journal, the press work on which has heretofore been done at Saranac Lake.

A I VOSBURGH GUEST OF HONOR AT NOTABLE GATHERING

Former Supervisor A. L Vosburgh, of Lake Clear Junction, was the guest of honor at a testimonial dinner given him at Hotel Saranac in Saranac Lake, Monday evening of the past week. Covers were laid for twenty-six at the tables and Town Clerk H. Ray Williams presided as toastmaster. Several brief addresses were made and in all of these tribute was paid to the guest of honor for his notable and efficient work on behalf of the town of Harrietstown and Saranac Lake village while representing the town for many years as supervisor on the County Board.

Mr. Vosburgh was presented with a bountiful fountain pen as a gift from his friends. Mr. Vosburgh feelingly expressed his "thanks for the gift and the sentiment which prompted it.

A. I. VOSBURGH OF LAKE CLEAR SUDDENLY

Former Supervisor Allen I. Vosburgh of Lake Clear, prominent member of the Republican party and a candidate for assessor on the Harrietstown Republican ticket, died at 5:30 a. m., Monday. He was 67 years old and had been ill since last Friday night when he was stricken with an attack of apoplexy.

He was buried from his late residence in Lake Clear at 2 p. m., Wednesday. Funeral services were conducted by Rev. H. D. Fender, pastor of the Adirondack Presbyterian church.

Born in Franklin Falls, the son of Isaiah and Alice Vosburgh. The family moved to Saranac Lake in 1876. Isaiah Vosburgh drove the mountain stage from Au Sable Forks to Saranac Lake and Mrs. Vosburgh accompanied him to that village to assist in the operation of Martin's hotel where the stage made its stop.

Mr. Vosburgh was graduated from the Harrietstown schools and from Eastman's business school in Rochester. On November 14, 1897 he married Etta Otis of Lake Clear. Two children were born to the couple, Maurice Vosburgh and Alice Vosburgh.

Soon after his marriage Mr. Vosburgh opened a general store in Lake Clear, which he conducted until several years ago. In his youth he was elected to several town offices and in 1923 he was elected supervisor of Harrietstown. He held that office until 1929. During his term in that capacity the Harrietstown hall was built and the concrete highway to Lake Clear.

Since relinquishing the office of supervisor he remained inactive in politics until this year when he was nominated as assessor for a two-year term.

Mr. Vosburgh was a 32d degree Mason and a member of the Saranac Lake lodge of Elks and numerous other organizations. He was an elder in the Adirondack Presbyterian church.

Surviving are his wife and son, Maurice, who lived at home, and his daughter, who is a resident of New York city; also a sister, Mrs. Fred Tremble of Saranac Lake.